Posted by DaveKennedy at 8:39 AM No comments: 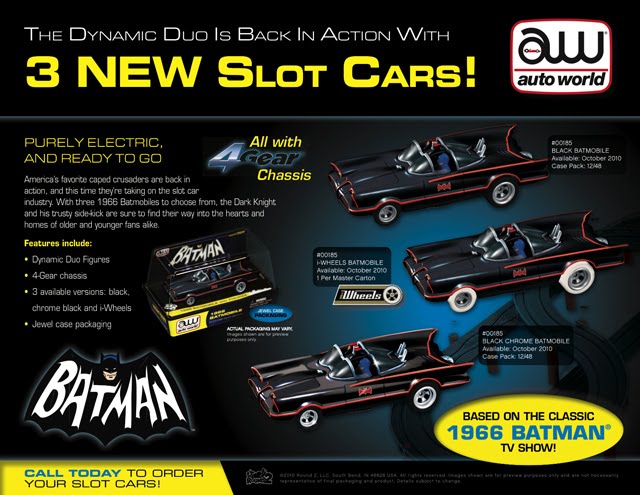 From REH:
Autoworld is running a small batch of #185 Batmobiles in April since the first batch sold out so quickly. This is a very small batch, and it will not include iWheels.
Posted by DaveKennedy at 12:00 AM No comments:

Is your name on this car?;)

Posted by DaveKennedy at 12:07 AM No comments:


While I was in Germany for Toyfair I had the great fortune to be able to visit a slot club. I had no idea what was waiting for me at this club. The video start with me eating dinner at the cafe in the club. What the heck? A cafe in a slot club, this completely blew my mind! What a wonderful idea... and the food was amazing. Anyplace you can get a cool Weiss Bier and race slots is the place for me!

The club was huge. The have a small store there for members to buy new parts/cars which was full of their preferred scale of cars, 1/24. They race tons of 1/24 Plafit chassis cars. Of course they also race Carrera too, being a club in German you'd expect that. Though what was unexpected was that the club races Carrera cars with the stock tires, something that is quite unusual especially for non-magnetic racing. They use oil they call, "cheater oil" to soften the tires and make them stick, and BOY do they stick! The track was VERY rubbered in and the cars stuck like crazy. I mention this in the video, maybe a bit too much but I was completely stunned. The running gear of the cars was stock with the magnets removed, weight added (which increased the weight of the cars to about 100 grams) and a light weight interior tray was added. The cars were hand-out cars owned by the club and the drivers all used Parma controllers to keep the field a bit more equal.

That night was a DTM series race. They had a tremendous field of 30 racers. The field was, as you might imagine mostly adult males, but there was also something different as I looked around the room... kids... women! They were racing all together. Now I know that sounds really odd for me to say but in all the visits I've done to clubs in the US I can could on one hand the number of times I've seen kids (I mean children under the age of about 14 or so) racing on the track during what is considered a "serious" race. Further, again counting on one hand, I don't ever remember seeing a woman race aside from "Mopar Jenny" who was a part of the team I raced with during the Chicago 24. When I asked if this was normal to have such a diverse field of drivers, I got a smile and "of course"... yeah, of course. Why not. Slots have been around in Germany as a mainstream hobby, really a main stream toy I should say, forever. Carrera have been around since the 60's and are a leading toy company in Germany/Austria. Now I know that those previous statements might be interpreted as maybe a bit odd to note, but I was really excited to see that the club was full of activity and full of future racers and families enjoying the evening together. This is what we need in the US... this is the future and the way forward for slots here!

I got to take some laps with a borrowed 1/24 car, Plafit chassis with BRM body on the wood track they have which is about 100' or so lap length. Using a borrowed Slot It SCP1 controller I did a little more than 100 laps and was within about 4/10's of what they consider fast... obviously a very easy car to drive! HA!

One thing that is always exciting to feel is the similarity between how people enjoy slot racing. I've had the good fortune to work for 2 slot companies now and I've been tremendously lucky to be able to visit not only Germany but Spain as well. What I've enjoyed most is not seeing the tracks and seeing some "unobtanium" that we cannot get here in the US, but talking with the slotbrothers (and sisters) and finding out that we all have a common language. It's amazing to see that smile of recognition on someone's face while you're talking about tires or chassis set up (in broken English or in my case very broken German) when they realize that you both love the hobby and you really understand the hobby in the same way. You feel at home and welcome, this is how I felt at Slot Connection.

They're having a 24-hour race in March.... hmmmmm.... how much are tickets to Nuremburg again?

Thanks to Christian who was my host for the evening, without whom the visit would not have been possible.

Dave Kennedy
Publisher, Slot Car News
Posted by DaveKennedy at 12:01 AM No comments:

CAR OF THE YEAR

SLOT MINIAUTO DELIVERY NSR THE CAR OF THE YEAR AWARD

Over the past Nuremberg Toy Fair, Slot MiniAuto delivered to the Italian manufacturer's NSR the 2010 Car of Year trophy for his Porsche 997 RS Rally.

The award is the result of the election of fans around the world, in a vote conducted through various social networks, Slot Adictos, Pasion Slot, DemoSlot Blog and Slot MiniAuto Facebook friends.

This is the eleventh convocation of the Car of the Year, one of the most recognized awards for global manufacturers of slot sector.

Please check the excellent coverage from Racer's upcoming releases on Slot Car Illustrated.com .
Posted by DaveKennedy at 6:24 AM No comments:

An official video from Kyosho showing their Dslot43 cars.
Posted by DaveKennedy at 6:05 AM No comments:

A video from the Carrera booth (Stadlbauer) from Toyfair in Nuremburg, Germany 2011.
Posted by DaveKennedy at 5:10 AM No comments:

MRRC is showing new cars on their website, the Cheetah is among them.

Posted by DaveKennedy at 9:32 AM No comments: