News from Power Slot to show this afternoon. 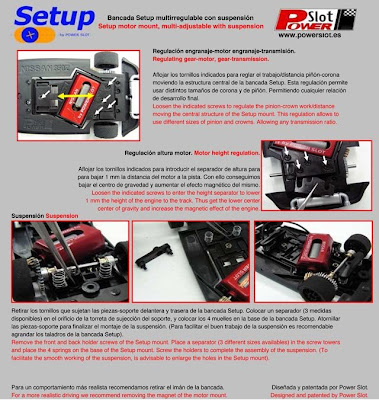 Posted by DaveKennedy at 1:13 PM No comments:

The Beardog Racing Lotus 34 has been a labour of love. Finding the reference has taken many hours of research and surfing Slotforum and the web. Again only 50 will be produced, complete with decals to assemble either the car as it is now in the Parnelli Jones museum, or as it raced in the1964 Indianapolis 500.

Team Lotus, showed up in 1963 with the then-new (and very controversial!) 15" Firestone tires, but for 1964, Colin Chapman (over the objections of Ford!) brought Dunlop to the Speedway, apparently for the contingency money, depending on whose account you read. Dunlop apparently did not figure on the sustained high speeds of Indy, especially when compared to their normal venue of road racing, and supplied tires with treads that were either too thick, too soft, or both.

The car modeled is the car that Jim Clark raced at the 1964 Indianapolis 500, earning the pole position with a speed 159.337 which was 7 mph faster than the lap record. During the race Jim had severe problems with the Dunlop tyres and only completed 44 laps. His car experienced tread "chunking" midway into the event, which quickly developed into the tread peeling off the tire, the resultant imbalance and extreme vibration breaking the left side rear suspension, and ending his race prematurely.

Beardog kits are available with everything you need to build a very unusual Slot Car. All components are ala carte, Body kit, 4 different motor choices, Chassis kit, Wheels and world renowned Ortman Tyres are all available, so that the customer can build a fast competitive racing slot-car, or a beautiful shelf queen with a full length driver and interior.

Each body kit comes complete with full color history and photos of all three Lotus 34's.

MOTOR PACKS: No less than 4 motor pack options are available from mild to wild.

FURTHER INFORMATION IS AVAILABLE BY CONTACTING CHRIS WRIGHT AT: beardogracing@comcast.net or visiting www.beardogracing.net

See photos of the new SCX Reese's Kevin Harvick CoT at this link. 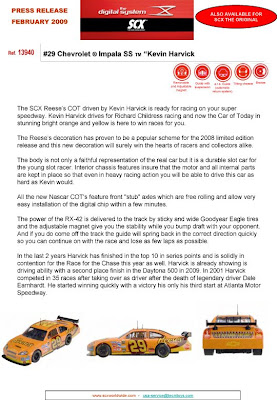 
Posted by DaveKennedy at 4:11 PM No comments:

USF1 will launch in only a few hours, who will be the sponsor? Who will drive for this team? All will be answered soon...

Posted by DaveKennedy at 12:45 AM No comments:

New Slot It Porsche on the way soon

Photos from Slot It of the latest Porsche 962 that will be available soon. 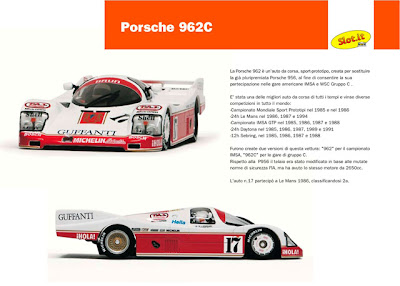 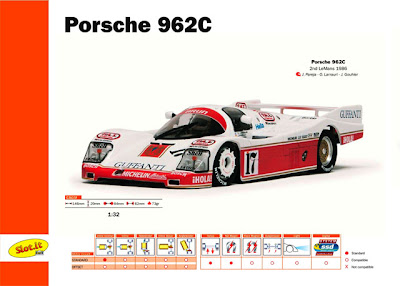 Posted by DaveKennedy at 12:16 AM No comments:

A bit more madness from "Slotcar"... love the ride with Denny!

So I've posted a tutorial about taking slot car photos at this link. Think macro, tripod, white balance... and practice.
Posted by DaveKennedy at 1:34 AM 4 comments:

See a gallery of photos on SCXWorldWide of the new SCX Hummer H3.

The tragic loss of life and property in Victoria following the worst bushfires in our history has affected us all.

In our first step to support the national relief effort, Armchair Racer would like to auction two rare slot cars and all the proceeds will go directly to The Salvation Army Bushfire Appeal. Furthermore we will cover all shipping costs to the winners, no matter the location.

Both are new and supplied in the original boxes. Details of the cars:

Car 1 is an Orange Warsteiner Porsche 956KH produced by Slot.it. This car was manufactured in 2008 for the Slot.it European Championship and only 50 were produced.

This is the first ‘fantasy’ livery produced by Slot.it and is in the Slot.it colours. In typical Slot.it style this is a magnificent looking slot car and without doubt will perform brilliantly on the track.

Car 2 is a little older. This Limited Edition TVR was manufactured in 2002 by Scalextric for the members of the Australian Scalextric Racing and Collectors Club (ASRCC). Only 250 units were produced and the Scalextric part number is C2452. The car being offered is #197 and will be supplied with the original certificate.

Rather than place these cars on any online auction site we are asking you to place your bid directly to us to avoid any unnecessary 3rd party fees.

This page will be updated daily – usually around 8.30pm Sydney time and also randomly if and when required – with the highest bid receive to date. The highest bidders first name and location will be also advised. If two bids are received with the same $ value we will accept the first bid as the winniing bid.

Both auctions commenced Tuesday 17 February 5.00pm and will end Monday 2 March at 9.15pm and the winners names and the winning bids will be advised by 9.30pm.

Payment may be made either to Armchair Racer and we will forward the proceeds to The Salvation Army or you may make your payment directly to www.salvos.org.au.
If choosing the second option we must receive a copy of your receipt before we ship your car.

Good luck and thank you in advance for supporting this cause.

Bids are to be emailed to cathy@armchairracer.com.au. Simply advise if you are bidding on Car 1 or Car 2 and place your bid in A$. Please also include your name and location.
Posted by DaveKennedy at 12:00 AM No comments:

A pair of prototype Jaguar's shown at Nurnberg's Toyfair.

A bunch of photos I shot during the recent toyfair in Nurnberg of the Slot It Chaparral 2E. Notice the big fat tires on the rear of this car. Slot It will have another winner on their hands I think with this car.

DS is coming out with a revolutionary controller. It's based on the new MRRC controller and is quite a surprising thing that DS has done. The features are listed in the photo but something that struck me was that it's probably the next step in this hobby being a solid sport. You can adjust the sensitivity, braking, everything that you've come to expect in a high end controller for serious competition. But most importantly...telemetry, it keeps a record of all the settings on the controller and the braking and throttle position for each lap. So if you're someone that either needs a starting point to know where to start to set up your controller (the system and software provided with the controller give you that info) or whether you're fine tuning your lap times and need to see exactly where you might be able to pick up a bit of time on the track. Is this information needed for slot racing? Strictly speaking, no. But, if you're serious about racing, this controller can give you that extra bit of information that could make a difference. It's a progression, an evolution.

The controller is connected to a laptop via a wifi connection that connects to both a PC and MAC (thank goodness for a MAC too!) via a USB antenna. The controller will connect to the USB antenna and the antenna will support many controllers so a club (or individual) will only have to buy 1 antenna to support use of up to 20 (I'm pretty sure that's the number) controllers.

The DS Testing Bench does just about everything that you could want it to do to help you set up a car for racing. Magnetic downforce, rpm testing, a bench for setting up your car. A prototype was on display at the toyfair in Nurnberg and hopefully soon we'll see this unique bench for sale.

Thanks to Sloting Plus for the news.
Posted by DaveKennedy at 12:02 AM No comments:

Photos of some new NSR Porsche's and a GT40 kit to show today from the Toyfair in Nurnberg. The Martini twin pack will be available near Christmas and surely will be popular with Porsche and Martini deco collectors.

The GT40 kit was on display in the NSR booth and should give fans of that classic body a great chance to create their own unique NSR GT40 decorated car.

This was the first time I got to really eyeball the NSR Porsches (though I saw them at IHobby in Chicago a while ago) and these are really quite nicely detailed models.