Sideways new #SW05 Riley MkXX Ganassi Racing Team TELMEX - GRAND AM Champion 2008 should arrive next week.
Posted by DaveKennedy at 12:00 AM No comments: 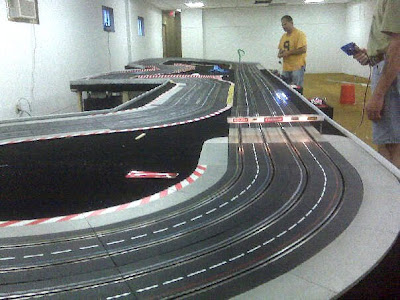 If you get the chance check out the website that I've set up for the club I race with... it's a good start I think. We've gotten the club's Carrera track up and going, and on the 5th of Sept. we're going to have our Sideways Daytona Prototype race, everyone is welcome to come and race with us at NePa Slot Car Club!
Posted by DaveKennedy at 6:22 PM 3 comments:

Posted by DaveKennedy at 9:00 AM No comments:

For the first time, the race car is based on the street-legal 2010 GT3 RS version. However, in keeping with tradition, it continues to be assembled on the same production line as all road-going Porsche 911 vehicles in Stuttgart-Zuffenhausen.

Like the flat-six “Boxer” engine in the new GT3 RS, displacement is increased by 0.2 liters over the former model to 3.8 liters and produces 30 more horsepower – 450 hp with a maximum RPM of 8,500. Additionally, it comes with a standard, sequential six-speed manual gearbox and weighs 2,646 lbs (1,200 kg).

The new 911 GT3 Cup is clearly recognizable at first sight through the special design of the front end. The striking daytime driving lights come straight from the current generation 911. Another carryover from the road-going 911 GT3 RS are the front body panels – as they prove aerodynamically-efficient for racing duty. The front spoiler lip is more than 0.5-inches lower to provide significantly more downforce on the front axle.

Downforce on the rear axle is also increased by the by virtue of a rear wing that is over 9-inches wider than the street version, 66.9 inches vs. 57.5 inches respectively. The rear air dam, with its air vent openings as well as the rear LED lights, also come straight from the road model.

Additional Unibal joints are featured on the track control arms and the front and rear anti-roll bars are now adjustable to seven different positions, allowing for an even more precise set-up of the car to best match each prospective race track.

The cockpit of the new 911 GT3 Cup caters even more to the specific needs of the driver. An additional vent in the upper part of the front lid, for example, provides the driver with a better supply of fresh air. The controls for the Info Display are now positioned directly on the steering wheel housing. And in addition to fore-and-aft adjustment, the steering wheel may now also be adjusted for height as on the regular production car.

News and photos used with permission from Porsche.
Posted by DaveKennedy at 4:31 PM No comments:

An update from Luiz Carlos Cardoso from Brasil (update not in english, but please enjoy the pix if you can't read the text):

Posted by DaveKennedy at 8:00 AM 2 comments:

Slotfather Harry Wise has replaced his beloved Artin Track, with a new wood track! Read the story at this link.
Posted by DaveKennedy at 12:00 AM No comments:

Ambrose had a standout weekend earlier this month at Watkins Glen International, where he finished second in the NASCAR Sprint Cup Series race after winning Aug. 9 in his lone NASCAR Nationwide Series start of the season. He is currently 17th in the Sprint Cup standings with three top-five and six top-10 finishes.

Kevin Doran's Daytona Prototype has competed in all nine rounds of the 2009 campaign, with a best finish of fifth at Virginia International Raceway in April, with Memo Gidley and Brad Jaeger at the wheel.

The next action for the Grand-Am Rolex Series will be the Aug. 29 Montreal 200 in Canada (SPEED Live, 2 p.m. ET), sharing Circuit Gilles Villeneuve with the NASCAR Nationwide Series and NASCAR Canadian Tire Series.
Posted by DaveKennedy at 5:00 PM No comments:

News from Sloting Plus to show this Monday morning:


Kind regards
Jacques
Sloting Plus
Posted by DaveKennedy at 9:03 AM No comments:

... I'm wondering how long it will be before Sideways announces this car as well...
Posted by DaveKennedy at 11:16 AM No comments:

http://www.gtslots.com/scheduled-events.php
Check this updated page for dates for final races at Great Traditions in Philly. There will be many US National Final Races at GT this year.
Posted by DaveKennedy at 12:00 AM 1 comment: 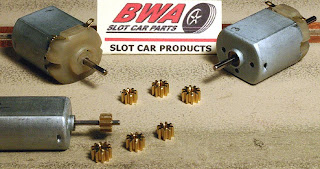 BWA has developed an FC-130 style motor intended for low-power racing, with performance similar to the Ninco NC1. Two sample motors are above, the plastic endbell showing on the left, and the metal can end showing on the right. Holes are tapped in the can end for 2mm screws, to provide a secure mount. Shafts are long on both ends to allow mounting in a variety of existing chassis.

Brass pinions have also been added to the BWA line, bored for the standard 2mm shafts, and 1.5mm shafts of the slim can (FF-050) which BWA also makes for lower-power racing. Tooth counts are 8, 9, and 10 for both shaft sizes. The diameter of the pinions increases as tooth count goes up, so smooth mesh may be achieved with standard 50 module pitch crown gears (such as Slot.It) by adjusting the mesh with spacers on the axle. Pinion diameters are 5mm (8 tooth), 5.4mm (9 tooth) and 6mm (10 tooth). These pinions are precisely bored to be a slip fit on the shafts. BWA advises fixing them with Loctite Red 262, with a drop applied to the inside of the pinion first.

Bench testing the new motors was done to determine RPM, torque, and maximum power capability. Five samples were tested, with no-load RPM at 12 volts, reading from 13,832 to 14,275 RPM. The motors were closely grouped in this narrow range, with an average of 14,103 RPM.

Torque was assessed at stall for two motors, showing 110 gcm for one and 115 gcm for the other. Each motor was measured nine times around a single armature revolution, using a 1 cm lever arm pushing on a gram scale at 4 volts; the readings were then averaged, and multiplied by 3 to derive 12 volt stall torque estimates.

Comparison to the Ninco NC1 shows the BWA ahead by a nose. We have tested the NC1 in the range of 12,858 to 14,237 RPM/12v (about 12 motors) with stall torque at 77gcm/12v (one motor). Approximately 35 more gcm of torque at the bottom end should make the BWA motor feel a bit more snappy off the line, but not so much that the venerable NC1 won't be competitive. At mid and high end RPM, the BWA motors should provide the same driving feel as the NC1.

At $1.00 each for the pinions, which can be had to fit FF-050 slim-can motors, as well as standard-can FC-130 motors, slot car builders now have the parts they need to complete their vintage and other low-power slot cars.

BWA parts are sold through the BWA web site only, at: www.bwaslotcars.com

Posted by Robert Livingston at 8:45 AM No comments: 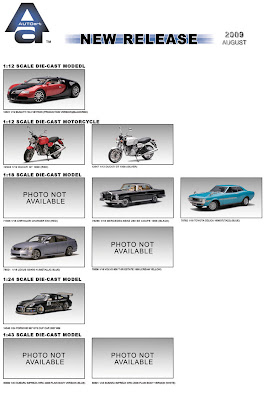 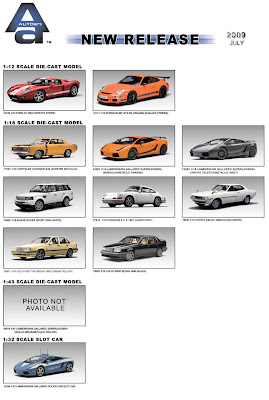 Posted by DaveKennedy at 9:15 AM No comments:

Thanks to John of MRRC for this flyer.
Posted by DaveKennedy at 12:00 AM No comments:

Posted by DaveKennedy at 8:58 PM No comments:

A very informative review of the SCX MotoGP's done by Doug Teggin of Slot Forum can be read at this link.

Posted by DaveKennedy at 2:50 PM No comments: