Image copyright McLaren.com
Lewis Hamilton
"The French round of the GP2 championship last year was not my best weekend, I had a coming together in the first race and therefore started race two in 19th. I did make my way up through the field to 5th to score some points, so it is possible to overtake here. Although you always want to be on pole, you can pass at Magny Cours and there is a short pit lane that means there are more strategy options, as it is not as much of a penalty when you stop for tyres and fuel. The pit lane is slightly longer than it used to be but it is still very quick. After the results in Canada and the United States it was great to come home and see my family and friends. I will also have the opportunity to go to the Goodwood Festival of Speed this weekend; I expect the atmosphere will be incredible and it should be great to drive the Vodafone McLaren Mercedes car up the hill in front of the British fans. For the past week I have been spending time at the McLaren Technology Centre working with the engineering team and catching up on some training and I participated in an event for Vodafone in London on Thursday. Now I just want to get back out on track. My aims remain the same, to take it race by race and keep focused on scoring good points for myself and the team."

Images used with permission of Sutton Images/SuperAguri and McLaren.com no reuse for any reason.

Slot Car News will have an announcement Monday morning (12:00 am EST)...
Posted by DaveKennedy at 2:11 AM No comments: Links to this post

Posted by DaveKennedy at 12:15 AM No comments: Links to this post

These are the first photos of the prototype of the MB Slot Zonda F.

The hits keep coming from Slot.It. The newest release is surely a slot car that needs little in the way of introduction, the Lancia Martini livery will be the "one to buy" for many slotters.

There are no breaks in the tampo printed stripes along the sides and top of the body. And none of this will come as a surprise to anyone familiar, as most are, with Slot It's products. There are no blemishes on the outside of the body of this car. Inside the body, near the front wheels, there is a bit of over spray, but you can't see this unless you remove the body. So it's another cosmetically wonderful slot car from Maurizio.

The Martini car has the black paint between the windows that the BP-Malardeau lacked. This detail isn't something that really took away from the first release of the Lancia, but it's nice to see this black tear drop shape around the greenhouse.

Thankfully for everyone out there who's a fan of Slot.It cars, Maurizio is never content to just release another car without trying to improve on his product. The Lancia body was supposed to have been lightened a bit, but both the Malardeau and the Martini weigh the same (22 grams), no big deal, since the real change can be seen when you flip the car over.

And there you have it. Not only the 21.5k "orange endbell" high torque motor, but the cut outs for an angle winder pod.

The changes aren't limited to the pod. The wires are routed under the front axle via the same channel design used on all recent releases. A great feature that is now a standard on new releases. The front wheels on this car didn't turn easily or touch the track on this car out of the box. Removal of the "cups" that are under front fix this with not too much trouble.

The car has the usual 28 tooth crown gear which now has a Slot.It logo on it. One of the very noticeable differences between the first Lancia release and this one is how much quieter this car is than the last car. Like the final black and red Nissan 390 and the McLaren this car is whisper quiet. I have a theory that in addition to a logo being added a slight change might have occurred in the gear mold yielding a gear that meshes just a bit better. One feature that the McLaren does have, however, is larger holes that the heads of the pod screws sit in. So, when you loosen the pod, the heads of the screws have plenty of room to move around. This small change was not incorporated into the new chassis made for the latest Lancia. The benefit of larger holes for the heads of the screws might be doubted by some, but personally, I'd like to see this small change made in future releases. When it comes to pod movement, every little bit helps.

6.229 stock tires, tight pod - the car feels too tight and twitchy around the corners.

5.9 stock tires, loose pod - car feels much smoother, and even with the stock tires the car is much easier to drive.

5.5 with the provided S2 tires

5.4 with Technical Editor Robert Livingston driving, in a different lane on the track.

A note about times. Times on this day were slower than normal, cars that normally were sub-5 second racers barely cracked that barrier around the 61 foot track. We'd expect this car to be slightly slower than the 956 and Nissan, and much slower than the McLaren (which still stands alone as the fastest Slot.It out-of-the-box, in testing by Slot Car News).

The new orange endbell-driven car is much faster down the straights than the older 25k powered Malardeau Lancia. Also, the car can be driven much further into the corners, because of the better brakes on the 21.5k. Gear ratio and weight are the same.

You just can't go wrong with any of the Slot.It cars. It's nice that there aren't really any negative surprises with their cars. You put them on the track and they fly around as fast as your driving ability will allow. The Martini Lancia LC2-84 should sell briskly because it's "one of those" liveries that many slotters collect.

Dave Kennedy
Publisher, Slot Car News
Posted by DaveKennedy at 12:17 AM No comments: Links to this post

Harry Wise of Home Racing World has done a review of the latest kit from Ninco...

It seems like yesterday when I acquired my first NINCO Ferrari F50 slot car. In truth it was 2001 and I purchased it because it would be a good running mate to go with the NINCO McLaren F1 GTR. I was right too as this car had very good balance and control and I enjoyed it very much. Sadly, not many of them were produced and I ended up with only one. Fast forward to 2007 and here is the Ferrari once more, and in kit form as a bonus.

Not everyone appreciates these new kits that seem to be coming more and more in our hobby, but I do. Given that we do perform various levels of tuning to our slot cars, having them in kit form just saves us a little time. Our box arrived safe and sound from MRC and it was time to assemble this famous Ferrari and see what she could on the track. The rest of this extensive review can be seen at this link.

Ferrari
Posted by DaveKennedy at 12:01 AM No comments: Links to this post

THE 2007 NINCO WORLD CUP WILL BE HELD IN STUTTGART, GERMANY, NOVEMBER 17TH AND 18TH.

Posted by DaveKennedy at 1:13 PM No comments: Links to this post 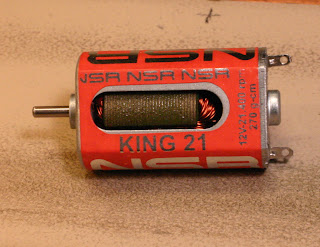 Fantasy World Hobbies was kind enough to send a sample of the NSR King, an FK-180 long can, high torque motor. The motor is rated at 21,400 RPM on 12 volts, no load, with torque at 270 gcm. This motor has been encountered on the race track, and it is a mover, despite its massive 32 grams of weight. The armature is balanced, resulting in smooth, vibration-free running. After letting it run up to operating temperature, the tach read 21,404 average RPM, with very little variation. It is not often that a motor runs at the same speed its manufacturer claims, but this one does!

The Motor List is updated frequently. You can find the link, highlighted in yellow, by scrolling to the foot of this page.
Posted by Robert Livingston at 12:05 AM No comments: Links to this post

formula 1
Posted by DaveKennedy at 12:00 AM No comments: Links to this post

Scalextric® (Tecnitoys/SCX) and Sloter have reached an agreement through as, in one first stage, Sloter will offer the Scalextric® technology the digital system in its new models. The first Digital car of Sloter will be the recognized Lola T280 of 1972, decorated with the logotipos of the Portuguese Intercontinental Bank.

In his second phase, this alliance will allow Scalextric® and Sloter to develop an ample joint catalogue of cars that it will include to the models more demanded by the fans of slot. The adaptation of the cars of Sloter to the Digital technology of Scalextric® implies the development of a new chassis that incorporates the electronic chip and the mechanisms necessary to make the characteristic changes of track. This will allow to the fans of slot at full speed to count on new models for its advancements and “encerronas”.

Founded in 2005, the company Sloter Minimodels is formed by fans to slot and professionals of the sector. Like fans, its trajectory begins in years 60 competing and organizing rallys and tests of resistance. Also they had to its position the organization of all the National Championships of Scalextric® (from 1986 to 1992). Professionally, the members of Sloter Minimodels count on the accumulated experience in their passage by the most prestigious companies of the sector of slot in positions of high responsibility. In 2003, Scalextric® revolutionized the market with the launching of Scalextric® the digital system. This technology incorporates an electronic chip that allows the pilot to make a change of track, to run with up to six cars simultaneously in a same track, to personalize the style of conduction of each car when regulating the levels of braking and the propellant charge available, and to control the information of the car constantly. On Scalextric® the digital system the strategy counts so much as the ability of the pilot to be able to arrive at upper from podio.

*A Google translation of this original text

A new photo to show today of Sloter's new Zytek. These should be on their way to the US soon I think.

And at Midnight EST readers of Slot Car News will find out exclusive information about Sloter....and their new digital products!
Posted by DaveKennedy at 9:24 PM 2 comments: Links to this post

hobbies
Posted by DaveKennedy at 12:06 AM No comments: Links to this post