Fernando Alonso, Pole position
"It is fantastic to be back on pole for the first time since Canada. It was a difficult qualifying session, very busy and very complicated for all the drivers, but the Michelin tyres were fantastic and gave us exactly what we needed to do the job. Looking for tomorrow, nothing is certain with the weather, but I am confident we can be competitive in both conditions. We haven’t done much dry running yet this weekend, but from what we have seen, the car seems to be very competitive. If it is wet, we know we are quick – but also that many more things can happen. Obviously, this is a great team result when the championship is so tight, but we haven’t done the job yet. I will stay focused, concentrate on doing a good race – and race for the win."

Giancarlo Fisichella, 2nd position
"The car has been quick all weekend, and I am really pleased to be on the front row with Fernando. This is a great result for me because I am in a good position to catch up Massa in the championship, and for the team it is the perfect starting point. The conditions were very tricky during the session, and I spun in the second session – so the pressure was on to get my lap done. After that, it was a question of repeating the performance in the third part, and making the most of the opportunity to qualifying at the front. I think we have a strong strategy, and good performance in all conditions. I am looking forward to a very competitive race."


RUBENS BARRICHELLO, 3rd position
“I’m thrilled to be back in the top three qualifiers again, especially after such a difficult session. This is a great result for the team with Jenson and I in 3rd and 4th and setting exactly the same lap time. It was pretty treacherous out there and at times it was just impossible to push. When I did I spun off and thankfully the gravel slowed me just enough for me to land on the grass. I was able to keep the engine running so I could keep going. Aside from that moment we’re looking pretty competitive in the wet and in the past the race has come my way many times in similar conditions. If that’s the way the weather plays out I’ll be happy but we have a car that works well either way.” 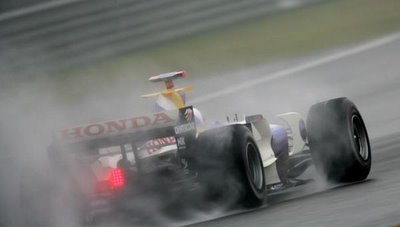 JENSON BUTTON, 4th position
“I’m very happy with today’s result, especially with Rubens and I posting exactly the same time. It’s been a very interesting day in which the Michelins are clearly very strong in the tricky conditions. It’s pretty slippery out there which made it tough going, but we’re looking good I think and I have a good strategy so we should be able to look forward to a great race, especially for the fans.”

All images and news used with permission of the Renault and Honda F1 teams.
Posted by DaveKennedy at 10:53 AM 2 comments: 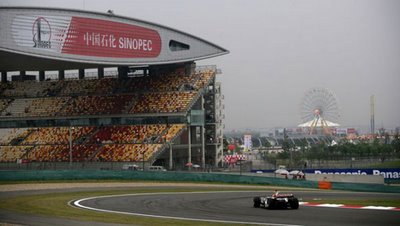 The 2006 championship is going down to the wire, and TV viewers around the world are savouring the duel between Fernando Alonso and Michael Schumacher during the last three races of the season.

In the same spirit, the organisers of the Chinese Grand Prix have shown that they can take a lighter touch when it comes to this deadly serious fight. At the end of the long back straight at the circuit, two grandstand sit opposite each other. And they have now been christened ‘Michael Schumacher’ and ‘Fernando Alonso’!

Mr Yu Zhifei, general manager of SIC Management and Development Co. Ltd., is proud of the results: “The two grandstands are absolutely identical ,and will allow the fans to choose their allegiance this weekend!”

For the moment, the number of fans in each stand has been very similar… let’s see who wins the vote on Sunday!

All three of the team’s drivers – third driver Anthony Davidson, plus race drivers Jenson Button and Rubens Barrichello – took to the 5.451-kilometre Shanghai International Circuit and the early indications for Sunday’s 56-lap race were positive.

The RA106 was immediately on the pace in the first one-hour session, with Davidson and Button second and third fastest. Barrichello, who won the inaugural Chinese GP in 2004, worked on a different tyre comparison programme during the session and was back in 12th place.

On a damp but drying track, Michael Schumacher has laid down the gauntlet to championship leader Fernando Alonso with the fastest time in Shanghai practice this morning. The German’s time of 1:40.193 was set towards the end of the session, and beat Fernando’s best by just 0.172 seconds.

Jenson Button took third position for Honda, a further two tenths behind Fernando, as the surprise of the session saw Tonio Liuzzi and Scott Speed take fourth and fifth for Toro Rosso with all of the drivers falling within a second of the best laptime of the day.

Mark Webber ended up sixth for Williams ahead of Albers in the Spyker, Giancarlo Fisichella’s Renault, the McLaren of Pedro de la Rosa and David Coulthard’s Red Bull. 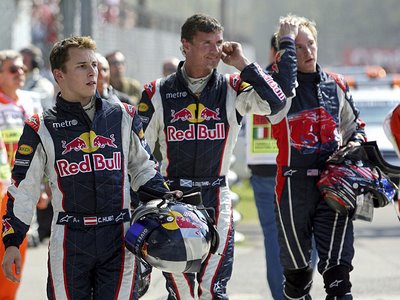 Robert Kubica and Kimi Raikkonen were the only drivers not to set a lap in an uncertain session, as running was kept to a minimum before this afternoon’s qualifying session. With the weather proving changeable, nobody is any the wiser as to what this afternoon’s session has in store. It should prove thrilling.

All three drivers completed more mileage in session two, during which rain was a constant threat. With 20 minutes of the session remaining, drizzle began to fall, which was enough to slow lap times compared to session one, but not enough to force the drivers off their grooved Michelin tyres.
-----
Images and news compiled from Honda and Renault F1 sites used here with permission. Red Bull images photocredit: (c)GEPA Pictures/Red Bull Photofiles
Posted by DaveKennedy at 12:42 AM 2 comments: 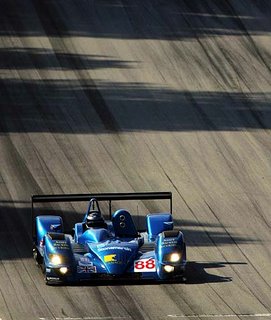 Minassian posted a time of 1:10.829 in the Judd-powered Creation Autosportif entry to best the diesel-powered Audi R10 TDI of Allan McNish by a razor-thin 0.081 seconds. Minassian's first appearance in the Series came at Petit Le Mans in 2004, qualifying second overall.

"The more poles the better. It's great," said Minassian, who will team with Jamie Campbell-Walter and Harold Primat in the No. 88 entry for Saturday's race. "The American ambience is always great. The competition is very tough and when you are able to beat the Audi it's very special. They are the best in sports cars right now."

The Vette C6.R is on the GT1 pole for the race and featured on the article below.

----
Updated with final standings after the race today. All images and news used with permission of the American LeMans Series.

DaveK
Posted by DaveKennedy at 12:12 AM No comments:

A few photos comparing the 2 C6.R's by Carrera and SCX. Both are great models and are well made by each of the company's. Each are worth the money and I consider them high points in recent releases in quality of detail in modeling and quality in workmanship.

My photo from the ALMS race at Lime Rock in 2005 for reference. 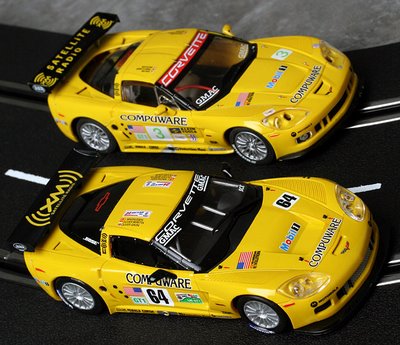 Photo above, the SCX is on the bottom, the Carrera on top. 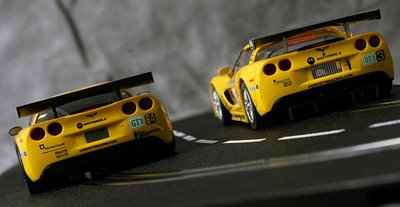 The SCX is on the left, the Carrera on the right. 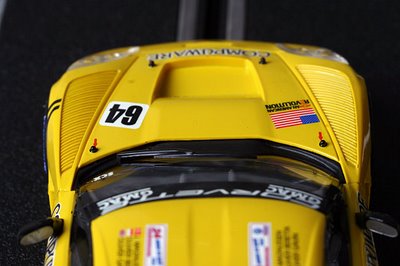 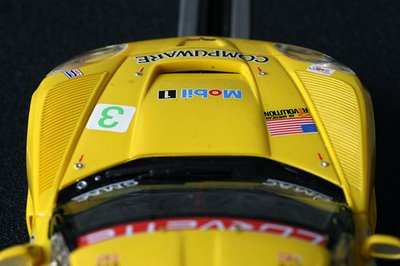 All images and ad from Carrera.
Posted by DaveKennedy at 1:50 AM No comments: 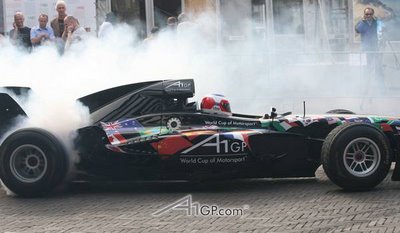 With the A1 GP season 2 days away here's a closer look at 6 cars Scalextric has produced so far and the real cars to compare to.
The Netherlands: 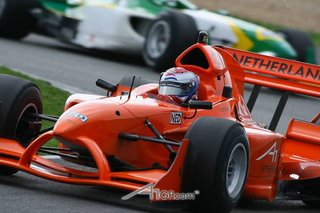 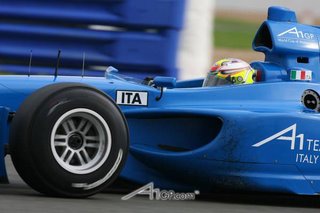 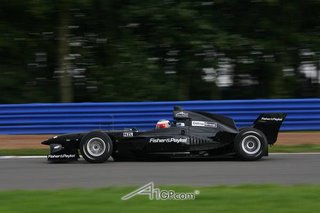 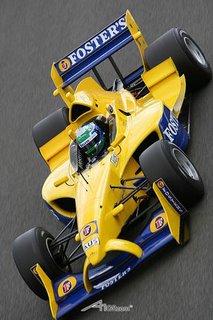 Hmmm, seems the car that practiced at Silverstone most recently is a bit more colourful than the Scalextric model. 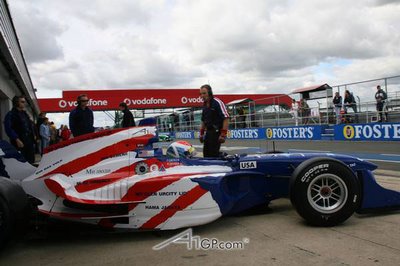 All photos use with permission of the A1 Grand Prix, no reuse without permission.
Posted by DaveKennedy at 12:00 AM No comments:

One photo to post of the new Scalextric Gulf Livery GT40. I saw this car in a local hobby shop last week, it's very nicely done.
Posted by DaveKennedy at 11:06 PM No comments:

Class: F1
History
On September 26th 2005, Fernando Alonso became the youngest world champion in Formula One history, after his thirteenth podium finish of the 2005 season in the Brazilian Grand Prix at Interlagos. At 24 years old, he also holds the records for the youngest holder of pole position and youngest race-winner.

The Scalextric model
The new rendition of the well-liked Renault livery now reflects the World Champion standings of Nos. “1” and “2” proudly displayed on the nose cone.
Advantages:
Scalextric are the only manufacturer to produce the current Renault F1 car.
High build-quality specification with equal high performance straight out of the box. 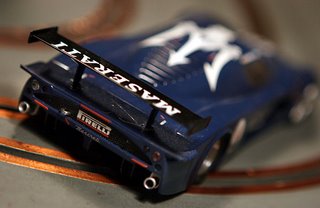 So finally the Maser I entered in the Race Across America gave up the ghost. I entered a car I knew was incompletely tested...and it performed that way. 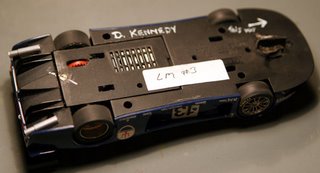 The Scalex Maserati is a car that many have said they just can't get to work the way they'd like... Originally I thought that I'd over power this car, thinking that the large body could "aborb" the extra power of the Scale Auto "Red Can". A few laps on the East New York Raceway quickly showed me I was wrong. So a Slot It 25k seemed like a good way to go. The motor has been glued in...and I'm not sure that I remember that I did that. 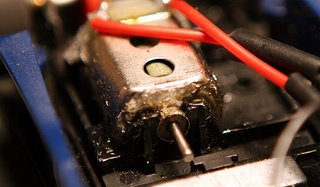 I put in large diameter Slot It wheels, Ortmann tires, hollow rear axle and 30 toother red crown Slot It. One account, given by none other than Alan Smith himself was that the car hopped so badly it was nearly undriveable. I'm thinking a poor choice of gearing is to blame for this. And speaking of gearing, there is lots of wear on the pinion here... 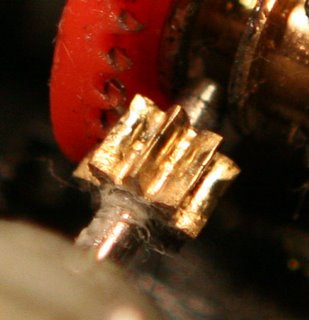 But the dampening or should I say sticker on the bottom may help that hopping since it would retard the motor pod tilting. 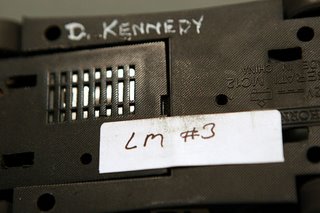 Nothing much going on inside the body though...lots of Ortmann dust caked inside! 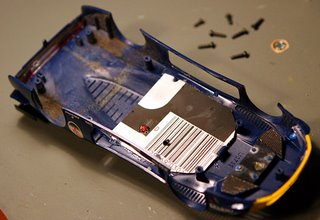 In the end it was these wires crossing, causing a short that made me pull the plug. 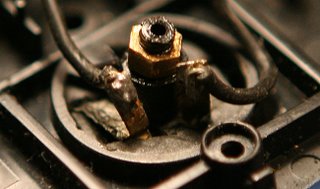 But in the end I'm laying the blame squarely on Wet Coast Racer for not heeding the instructions on the bottom of the chassis for a poor showing in his stage of the RAA... 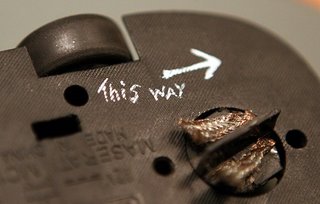 The Galaxie has molded-in posts for the Carrera Vintage Stocker Chassis, such as found on the Plymouth Superbird they produce. The chassis fits zero minor trimming that does not ruin the chassis for use on the original Carrera car. This kit also included decals (the only one to do so) and costs $40. You can see the decals I have available on my web page. These decals are excellent quality, first runs, and completely authentic.

The Omega and Ventura are fun early Busch GN cars, fairground stompers, whatever. They fit the Artin Stocker Chassis with no modifications, and run $25 each.
Posted by DaveKennedy at 12:00 AM No comments: 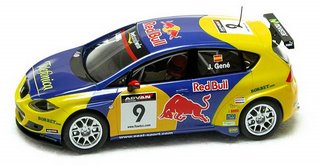 History
Race 9 of the 2006 World Touring Car Championship (WTCC) fell to race victor Jordi Gené for SEAT Sport. Gené had a great start from the front row. On lap 6 Gené was clearly closing on the lead man and reduced the gap to just 0.198 of a second over the following three laps. The Spaniard didn't let the opportunity go to waste; squeezing through to take the win at the Curitiba circuit in Brazil.

Race picture: The Scalextric car is based on this car. Shown here are team mates Muller and Thompson in identically liveried cars. 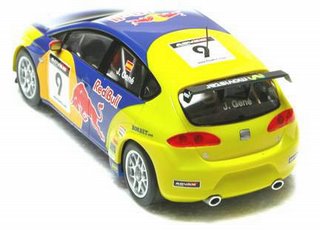 Posted by DaveKennedy at 11:59 PM No comments: