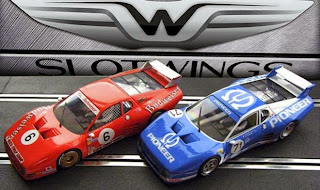 New Company, "Slotwings" showed prototypes of their upcoming 1/32 Ferrari 512BB at Slotlandia. The samples were shown fully decorated (see above photo) but we were cautioned that the models may change some details by production.

The first two releases in the series will apparently be the no. 6 North American Racing Team entry from the 24 Hours of Daytona 1982 piloted by "Brilliant" Bob Wollek, Edgar Doren and Randy Lanier with the no. 71 Ferrari France entry from LeMans 1982 driven by J. C. Ballot-Lena and Jean-Claude Andruet.

No firm release dates were mentioned but it is a reasonable estimate that they will be available in the December time-frame.