This is the first in new family of motors that will replace some of the current motors. 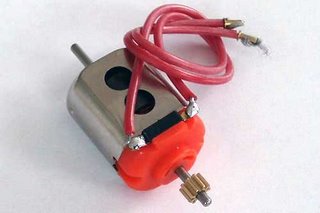 It is the first of a new generation of motor, which improves upon its predecessors' magnets, balancing, bushing and cooling. The first member is a 21500 RPM motor, with 170g.cm torque, and a max power 0f 9.6W. The endbell is orange and carries the Slot.it logo.

This motor will be standard on the Slot.it cars in the future. For the time being, all the V12/2 motors will be produced. Pricing will remain the same as the other V12/2 motors, part numbers:


Images and description used with permission of Slot.It.

Editor's note:
This motor appears to mark an important shift in the current line of motors. If you have a short track or just like slower motors it seems that Slot.It is going in the "less (RPM) is more" direction, and I applaud that. At least the slotter is getting more choices in quality motors, and that's never a bad thing. Especially with the high quality Slot.It is known for.
With the absence of the now out of production NC1 Ninco will Slot.It produce a similar motor? Time will tell.

In the near future the Clarion Nissan R390 GT1 will be released with a "chassis surprise", will the Clarion be the first car with the new "standard" 21k? Is this the surprise in the chassis?

DaveK
Posted by DaveKennedy at 10:16 AM

Geared correctly, it would push a slot car faster on many tracks, and would probably go down the straights just as fast.

If you multiply RPM times torque, you find that the 25k produces only 83% of the new motor's power.

Compared to a standard Scalextric or Fly motor, estimated to produce about 100 g-cm torque, and to spool up to 20k, the new Slot.It approaches TWICE the power.

Dave it would be great if Slot-it did make an NC-1 style motor. I'd buy.