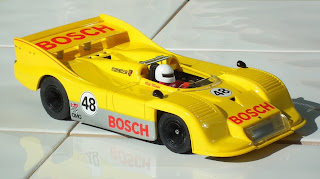 Carrera took the slot car racing world by storm when they introduced their first Can Am models: the iconic McLaren M20 and Porsche 917/30 turbo panzer. The 917/30 represents the ultimate evolution of the legendary 917 chassis. In some respects I was surprised when Carrera released their first 917/30 as there are not many racing liveries. The yellow Bosch car sent to me for testing is a model of chassis number 917/30-006. Stripped of its roof, covered with wind tunnel tuned bodywork, and powered by a 5.4l twin-turbo flat 12, it is this model from Porsche that dominated the final years of the Can Am championship. 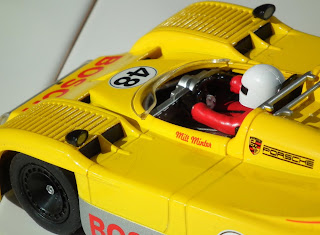 When the plug was abruptly pulled on Porsche’s Can Am program at the end of 1973, three of the six chassis constructed were never fully completed. This particular chassis was already at Penske’s shop undergoing preparation for the ’74 season so it quietly went into storage. In 1982, one of Porsche’s most famous car dealership/race team owners, Vasek Polak, acquired the chassis along with many spares though not enough to finish the car. He made it his mission to find enough spares to complete chassis #6. It took him until 1995 to complete this project after which he put it up for sale. It has since appeared in vintage races like the 2009 Monterey Historic Races where Porsche was the featured marque, and Rennsport Reunion III at Daytona in 2007. 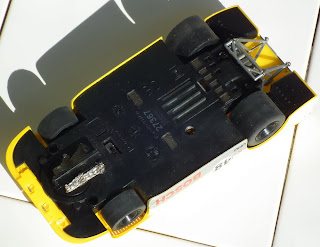 In the few years that I’ve been collecting slot cars I’ve often noticed that for some reason yellow liveries are very difficult to reproduce. Carrera has done an excellent job with this Bosch livery. The yellow paint really pops and the tampo is very crisp and opaque. Fine details like the vents in the front fenders are nicely rendered. As is now common, Carrera Evolution cars share chassis with the D132 models. That means this model has independently rotating front wheels and a tray interior. Carrera also includes extra braid and mirrors for this car in the box. To run this car on my 20m Scalextric Sport test track I swapped out the stock guide for a narrower and shorter Special Guide Keel (85309). On the Magnet Marshal this car weighed in at 97g, and the dual traction magnets pulled 213g of downforce. Out of the box this car lapped my test track in 7.634 seconds – or about a second a lap slower than my lightly tuned Carrera Sunoco 917/30. A slight wobble on the rear axle of my test car was most likely responsible for the performance disparity between it and other Carrera Can Am models I have tested. A trip to the tire truer will be the first stop once I start tuning this car.
On the 22m wood test track I used the wheel issue also held this car back from its full potential recording a fastest lap of 8.810s. The massive rear wheels on this car use a sold centre rib. This car would respond favourably to aftermarket tires especially if they were glued to the rim. In addition to truing the tires, eliminating play in the rear axle bushings would be another area to examine in the quest for more speed. 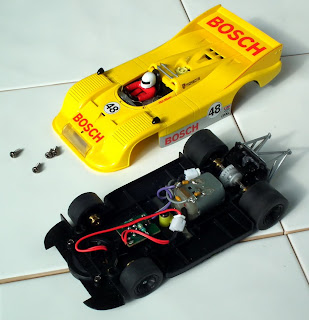 Overall I think Carrera has done a great job on this car. They have picked an obscure but interesting subject to model the car after and have really done a good job of capturing the shape and colour of the original. The out of the box performance is acceptable and my test subject’s performance can be brought into line with that of other Carrera Can Am cars without too much work. Given that the only other way a slot racer can add a 917/30 to his collection is by building up an expensive resin kit, the Carrera becomes quite an attractive choice.
Posted by Van LaPointe at 12:07 AM