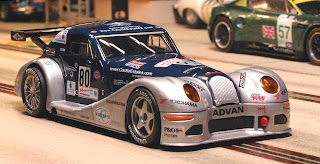 The unusual, long-anticipated Morgan Aero 8 has been released by SCX. Shiny, well-detailed, with fine tampos, accurate shape and contour (except for the rear tires projecting out of the fenders), the car presents an excellent appearance. But, how does it run?

Test laps out of the box revealed a smooth driving feel, on wood, no magnets. The original tires barely gripped my track, so I quickly found a pair of Slot.It S1 silicones, which are a perfect fit on the original rear wheels. The car woke up, and developed a solid feel. A noisy drive train grew slightly more quiet as it ran. Motor is an RX-42B, rated 18,000 RPM on 12 volts, and gear ratio is 3:1 (9:27). Stiff competition from Scalextrics in GT2 class would be expected; on some tracks, a slight decrease in reduction may help (say, 2.8:1 rather than 3:1). The motor pod is a four-post, snap-in rocker, one of the better designs SCX has created.

A few small adjustments to the chassis and the car became more rapid, and very easy to drive near its limit. I removed the small locating pins which project from the body and engage holes in the chassis, under the running boards (just ahead of the rear wheels). I removed the two forward body mount screws altogether. The interlocks in the nose, and the rear body screw, are sufficient to keep the car together. The rear screw was backed out a half-turn. To allow a little more isolation of chassis vibration from the body, I bent the head and tail light contact tabs upward, to lessen the pressure on the chassis slightly. Between the lessened pressure and the loosened body, the lights began flickering as the car ran. But the speed picked up, and soon the car was clicking off lap times in the range of 5.5 sec. per 61 foot lap.

Careful inspection showed one rear wheel was slightly wobbly. Rather than attempting to true it, I installed short-projection hubs from a Slot.It Ferrari 312PB (size 15x8, part #PA17al), with SCX Pro inserts. SCX Pro wheels will not fit, due to their long hubs, and the set screws hitting the chassis. A very slight trim of the plastic chassis was necessary to bring the tires into the body, where they belong. The elimination of wheel-induced vibration resulted in a return to steady, bright lights. Speed improved, and the car was quieter.

The stub-axle front wheels on this car were examined closely, but did not need to be adjusted in any way. One headlight LED was pushed forward, into its "bucket", to eliminate scraping on the tire. Careful smoothing of the braids in the guide resulted in both wheels rolling on the track, providing a stable chassis platform through the corners. The independent-rotating wheels have little wobble, spin freely, and work well without any tuning.

A final upgrade to Slot.It rear axle, SCX Pro bearings, 28 tooth crown, and 10 tooth SCX Pro pinion (2.8:1 ratio), led to a best lap time of 5.387 sec. per 61 foot lap, a substantial improvement indeed. No weight was added or removed. And after a hundred laps of practice, with the motor up to operating temperature, and the brushes starting to bed in, the Morgan turned 5.303. 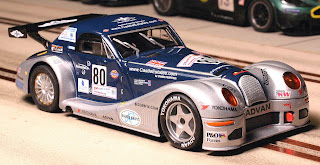 With increasing interest in GT2 cars, with motors rated under 20k RPM and under 150 gcm torque, this car is a fine competitor in its class. Appearance and handling is excellent, with need for only minor adjustment, as we have come to expect from SCX. Thanks to Dave K of SCX for providing a production sample of the Morgan Aero 8.
Posted by Robert Livingston at 12:00 AM

I don't like this car... Different wheels with not very nice color. Very strange choice from SCX!

I would like to use one as a basis for the 2009 Race Accross America proxy series.