The A1GP World Cup of Motorsport kicks off its second season today with its official team test session at the Silverstone Circuit in Great Britain. A1Team Malaysia, winners of the 2005/06 season’s last race in Shanghai set the fastest lap time of the day but this time with Fairuz Fauzy behind the wheel. Current champions A1 Team France took the second spot on the time sheet with Nicolas Lapierre in the car.

Once again, the Series will pit country against country on a level playing field with A1 Teams flying their flags in races for national pride. While teams that took part in the inaugural season return for the second Series, there will also be new names on the entry list. First to raise its flag will be A1 Team Turkey. At a time when its country is the centre of international motorsport, with the support of the national government, new seat holder Lodos Racing Inc has committed to forming a national team for the first race at Zandvoort.

With over 100,000 tickets sold to date, A1GP Zandvoort is set to be the biggest event of the Series so far when the Dutch fans will be rewarded for their enthusiastic support of their hero Jos Verstappen with a home race. To guarantee the fans maximum excitement, a new system is being used to determine the grid for the Feature race. This will no longer be solely on the results of the Sprint race, but a combination of Qualifying results, Sprint race finishes and fastest lap times.

As A1GP looks forward to its second season, planning is already underway to develop the Series. For the 2008/09 season the A1GP management is investigating the possibility of increasing the engine output towards the 700bhp mark, a move that is totally supported by At Team Brazil seat holder, Emerson Fittipaldi. Discussions with engineers, suppliers and race technical staff to determine possible configurations for a new vehicle have been initiated to determine what options may be available given A1GP’s racing parameters. More news will be forthcoming in this area as they develop.

On the broadcast front, A1GP has successfully renewed the vast majority of their broadcast agreements from season one. In addition, new broadcasters in a number of major territories including the USA and Canada are in the final stages of negotiation. Fox Sports Channels has been confirmed as a new carrier for this season distributing A1GP’s races live throughout central and Latin America. 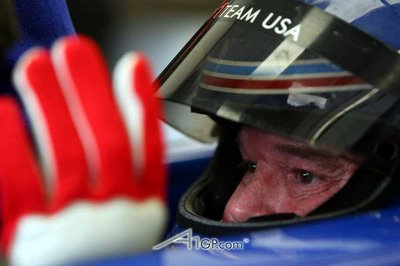 And how can the USA team go wrong...they have Al Unser Jr. driving?!?!

On a related note, Scalextric has shipped a few of their A1GP cars already. The British and French team cars appear to be at a few North American retailers already.

As always, all news/photos used with permission from the A1 Grand Prix.
Posted by DaveKennedy at 12:03 PM

Al jr. is good if the car is perfect, but if you want someone who will drive the car hard regardless, get an Andretti, like Marco!