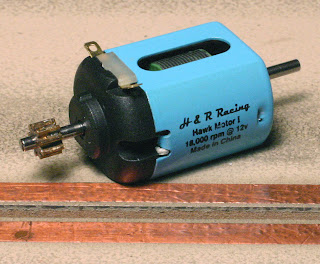 Gene's Slot Car Place kindly sent two samples of the new H&R Racing Hawk Motor I. This motor is intended as an upgrade for standard Scalextric and Fly motors. It has long shafts on both ends, for universal fit; it will also fit Carrera cars.

On the 12.00 volt tachometer test, with a drop of oil on each bearing, I obtained readings of 18.9k to 19.0k, in either direction of rotation. Both motors ran the same RPM. There was no clearly faster direction of rotation with one motor, but the other seemed to favor endbell drive, CW rotation (Scalextric inline and SW style). Although one motor was balanced and the other was not (blue epoxy on the armature), neither motor seemed to vibrate more. Both were fairly smooth. 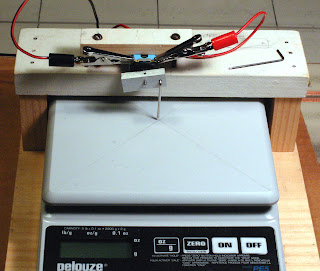 Using a torque-arm tester, I measured the twisting force the balanced motor develops at stall. Readings indicate an average of 70 gcm at 6 volts, which equates to about 140 gcm at 12 volts. One pole was pushing harder than the others, which may cause vibration under load.

The Hawk motor tests out as a more powerful, torquey, but slower revving motor than the motors it replaces. Torque is nearly twice the Scalex/Fly standard. Geared in the range of 2.6 through 2.8:1, it should push those slot cars faster. It looks like a good performance upgrade.

You can buy the Hawk at Slotcarplace.com
Cost is a mere $8.95. Pinion not included!
Posted by Robert Livingston at 12:01 AM

Will this be legal for CPR 2009 ?,Seems to have the ideal spec,especially that torque figure.

Yes, it would be legal for CPR GTU class. It is on the CPR motor list, but the name is erroneously stated as "Lightning". The Lightning is H&R's other motor (40k).

Oops! There is a mistake in the motor list. The 'Hawk' motor is eligible for CPR competition.