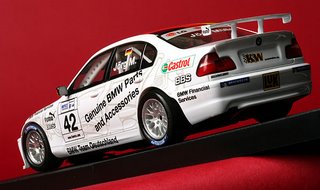 The SCX BMW 320 WTCC might have 4 doors but it's no grocery getter. Right away as I dug this car out of the box I knew that my opinion of this particular slot car had gone way, way up. The lines on the body are great. I'm not a huge fan of the larger fendered BMW slot cars but this one seems to capture the real car's, um...je ne sais quoi... There's something appealing about the overall apperance of this car that, now that I have it in front of me I can't quite put my finger on it, but it just seems to be "all there" for the slotter. 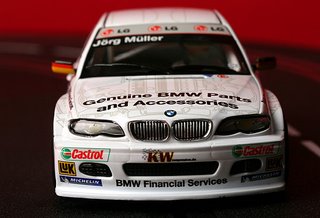 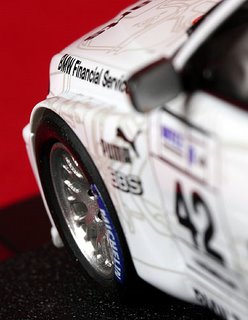 The wheels are very nicely done, and concentric by the way. The tires, which grip very, very well to my wood track and printed with Michelan logos on the sides. 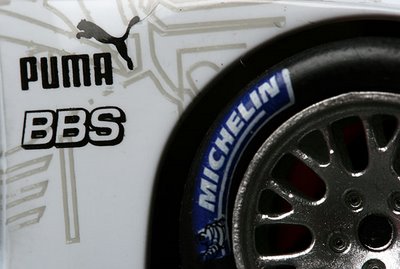 The white body is finely printed with a light grey design of the interior and unless you're really looking for it you might overlook the fact that it's even there. The base white color is well done and covers the body well. The black tampo printing is well done and crisp around the entire car.

The lights are very bright and may even be bright enough for a little lights-out fun. Sorry no pix of those this time, you'll have to take my word on it. And the lights don't shine though the plastic body, kudo's on this account alone.

The only minor issue I have with this particular car is the background black detail painting on one of the grilles on the front of the car isn't done well....yup, that's it. Aside from that, there's nothing the grabs my eye as a "visual snag".

The interior half pan has some nice detailing and I'm particularly taken with the roll bar design execution. 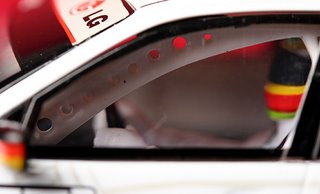 Moving to the chassis we see SCX has used 3 body screws. Two on the sides about half way done the length of the car and one at the rear. Why not have any in the front? Well that's because the front of the body is held by the lower front grilles which have been molded so they protrude through the body and act as body mounts. This is a personal favorite of mine for a slot car design...no screws needed in the front, I LOVE IT! 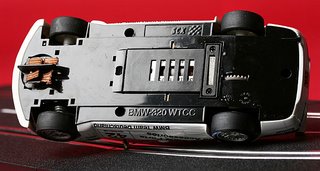 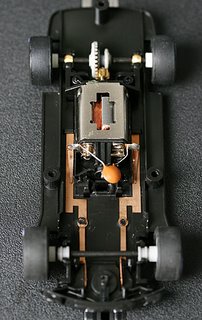 This car's motor pod has four post arrangement, unlike some of the other recent releases which have the two post pivoting system. I'm not sure why SCX has chosen to vary this design from car-to-car, but I must say both designs seem to work very well. One odd thing with some of the recent SCX cars is that the magnet isn't fixed down well and one corner of the magnet always seems to stick up into the body.

Inside the RX-42 is the powerplant, and the famous "wireless" system provides the power for the car and the lights. 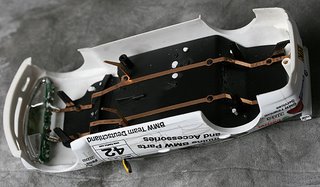 So how does it perform? Well this car zips right along with a minimum of effort. The pod does it's job well and the tires stick very well. The car does suffer from a bit of gear noise, not unlike some of it's coffee-grinder-with-rocks-inside BMW Ninco cousins. The car does come with lots and lots (did I mention "lots"?) of grease on every moving surface. Even so the gears are a bit noisier than I'd like. To try and help deaden the noise, which I think is made worse by the resonance of the interior pan, I put a small piece of duct tape. It worked well but more will be added to help quite the car done even more. But I don't want to overstate this, the car is not unpleasantly noisey, it would just be more BMW-like if it were quiter. 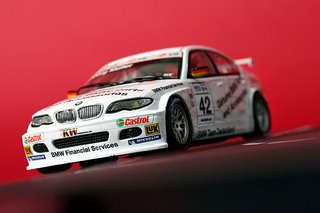 If you're into BMW's this is a must have...if you're not that much into BMW's this is a damn fine car that deserves a look, especially if you're a wood track guy. Out-of-the-box this car goes very well on my wood track. In fact with just a bit of sanding this car handled like it had been tuned specifically for wood tracks! The only deslot I had after many high speed laps was a slide out of the nose, which is a little light with no weight added. But, wow there's not much to do to get it going in a hurry. And with the motor pod and easy replacement with a snap-in of a Turbo Pro motor, this car has real potential for the serious racers out there.

Thanks to SCX for sending the car!
DaveK
Publisher, Slot Car News
Posted by DaveKennedy at 11:37 PM

Another great review, Dave, and rather timely in my case, having just got a couple new SCXs. I got the Aston and the Red Bull Seat touring car and was very impressed with the appearance and quality, except....both cars had the headlights burn out within 10 laps! I was running stock Scalextric Sport power, about 16v, what did you run them on?

Otherwise, they are great cars and handle very well without magnets. The Seat has the 4 post pod like the Bimmer and I like it. The pivot pod works well, but can travel a little too much and I have used a strip of tape to limit it a bit. I also had some hesitation on one, but it turned out to be a hung-up motor brush, something to check for with these type motors.

I ran this one on my wood track at 11 volts, which is the baseline power that I run all my cars on.