Lane Change Tracks (40201) make it possible to change lanes. Located in a standard NINCO 40mm track section, you can simply remove a standard straight and replace it with a lane changing section without changing your layout. They’re available in sets containing a R-L & a L-R section. As I mentioned earlier, racing is always clockwise, and NINCO has printed red & white directional stripes on the operating ends of each piece. Like on a model railroad switch track, there’s a “flipper” that causes the direction of the car to change. Activated by a small, super fast solenoid beneath the track, the flipper that is normally in the straight (non-lane change position) moves to allow the car to change lanes. It’s unbelievably fast.

There are two small slits in the rails that break a 2 inch section of the track about 2 inches from the flipper that actually sense the presence of the pickup braids. If the lane change button is pressed when your car rides over this section, the flipper flips and the car changes lanes. The flipper neutralizes itself before the rear of your car goes past the flipper... that’s why another car can’t follow you unless the other driver has his lane change button pressed. It’s fast and I couldn’t get it to fail. There are no other sensors required; no new or special slot guides, no LED’s, mechanical triggers, infrared or anything. It’s all done through the rails. 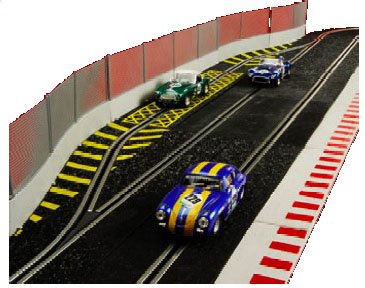 The N-Digital Pit Lane Kit (40203) is really nice. It’s a single lane and comes with a turn-in and a turnout, two 40mm pieces of single lane track, and is printed with yellow racing stripes and lines. There’s a cable that must be plugged into the accessory socket on the Control Console that read the sensors on the track. The pit lane is designed for the direction of travel and there are no additional single lane pieces available at this time. You can go in and out of the pits at any time by pressing the lane change button on the controller as for any other lane change, but you must be in the PS mode to be able to use the pit lane for regulated fuel stops. as previously described.

The Multi-Lane kit (40204) takes N-Digital to new heights, and can really make racing fun. This kit makes possible that four, six or eight lane layout that people have dreams about. Racing eight cars together on two lanes with N-Digital is certainly impressive, but add many more lanes with a pit stop kit and you can really have the type of racing that dreams are made of... being able to go from lanes two to three and four to five, etc. The Multi-Lane kit contains a pair of lane change pieces, and some straight single lane track. NINCO’s standard “Easy-Clip” connection lugs that clip normal pieces together are reversed, because they connect only on the opposite lane, being able to allow lane two to switch to lane three.
Posted by DaveKennedy at 11:32 AM