John Kit's Studio 65 is known by 1/32 slot racers for their line of classic driver busts, track side buildings and slot car detailing parts.

Now John and his daughter Emma have taken the next step and launched Studio 65's first ready to run slot car. 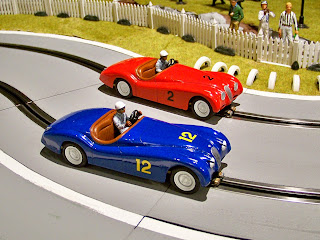 Studio 65's initial offering is a 1/32 scale Jaguar XK120, in a club-sport configuration. Each racer is hand built by John and Emma, and they boast a resin body with a brass chassis.

Most of the work was done by Emma, who learned how to make molds, pour resin, paint and solder. The cars you see here are the result of her effort. 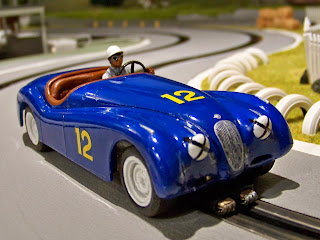 Studio 65
Automotive Art You Can Use
racewithus@studio-65.com

Here is the video if you would like to learn more about the Slot Car Cave raceway.

If Channel 36 Charlotte's "Larry Sprinkle" seems familiar to you, you might be remembering him from back in the day when he was the "Ty-D-Bol" man.

Set the WABAC Machine for 2008

These are photos of Ernie Mossetti's groundbreaking and innovative 1/24 Can-Am racer run in the 2008 North American Masters.

The car has amazing attention to detail on the construction of the chassis as you can see in the photos below. 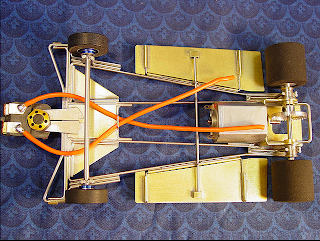 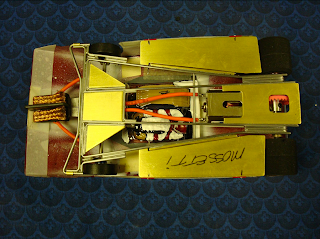 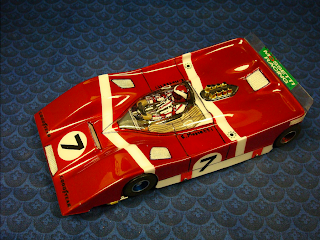 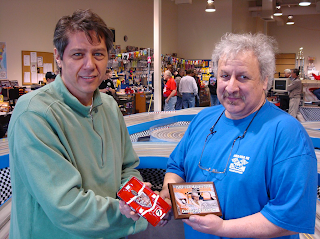 Slot.it's ongoing project to replicate the majority of the LeMans Group "C" era in 1/32 scale continues with the release of the TWR Jaguar XJR12 in "Suntec" livery.

This version should be available at your local Slot.it dealer before the end of November. 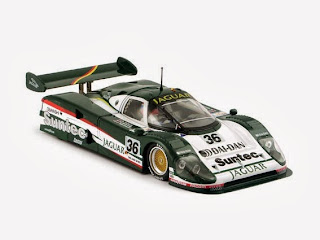 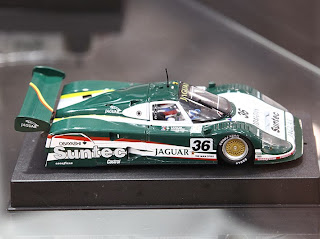 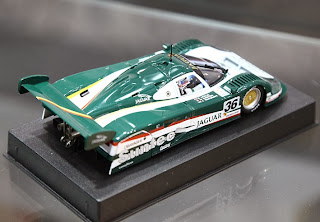 The 1974 World Sportscar Championship was a rout for the French Matra team with their V-12 MS670B and MS670C racers winning all of the series rounds except the very first. The Matra team suffered engine failures with both entries at the Monza round but thereafter the cars had great reliability.

It is interesting to note that Matra's partner SIMCA was at that time a part of Chrysler Corporation and as such the Matra-Simca MS670 racers sported the Chrysler "Pentastar" on the rear flank. To the best of my knowledge, this is the only instance in modern LeMans history that a Chrysler backed racing car has won the overall victory.

The Slot.it model is expected to be decorated in full "Gitanes" cigarette logos, but they may be camouflaged by removable stickers similar to the other recent offerings from Slot.it where the prototype sported "adult" sponsors.

The sister #7 car driven by H. Pescarolo and G. Larrousse to the overall 1974 LeMans 24 h victory is expected in 1Q 2014 as part of the "LeMans Winners" collection with special packaging. 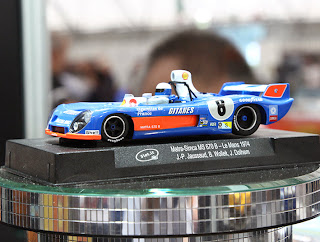 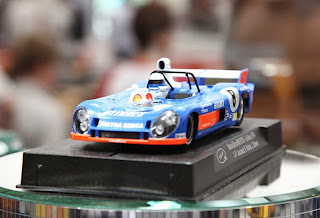 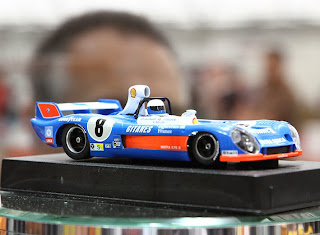 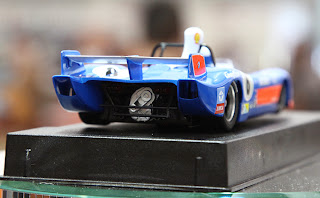 Ernie Mossetti of MR Slotcar ("MR" refers to Mossetti Racing) has announced additional liveries as well as new subjects for the MR Slotcar line of ready to run 1/32 slotcars and parts.

I am told that the company has solved their production problems and will be able to deliver product on a regular basis during 2014.

In addition to the Calsonic and Men's Tenoras versions previously announced, this "Cabin" livery is planned for the Nissan R89C.


These liveries were added for the Lola T-70 Roadster.

A new subject planned for the MR Slotcar line is the 1986 McLaren F1 GTR.

It is unknown at this time if the cars shown above with Tobacco markings will be produced as shown or with some sort of camouflage.

Randy Wishard and his commercial track "Slot Car Mania" was featured in this weekend's edition of the Journal Gazette and Times Courier. 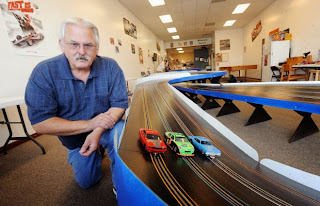 The iHobby Expo is the worlds largest model hobby show for the trade and consumers.

Carrera of America are among the slot car oriented manufacturers showing and demonstrating their newest products at the 2013 edition of the iHobby Expo. This year's iHobby Expo is located at the Schaumburg, IL (Chicago Suburb) Convention Center. iHobby will be open to the general public October 5-6 2013. 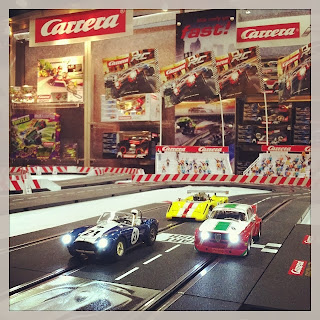 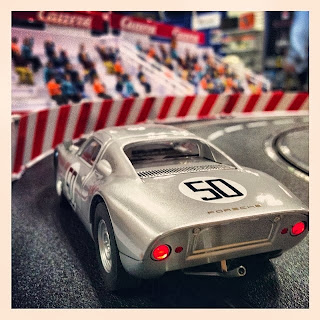 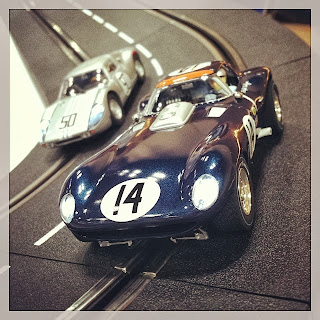 Slot car companies scheduled to be among the over 300 exhibitors at iHobby Include: Scalextric (Hornby), Slot.it, Policar, REH Distributing, A/FX-Racemasters, Parma International, Round 2 LLC, and MRC/Ninco.

The kit comes with a pre-painted body shell in the correct "Mecom Blue" as shown below. 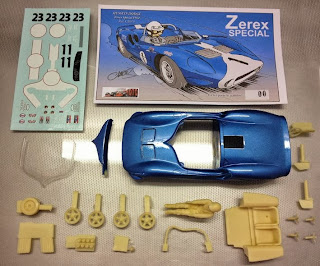 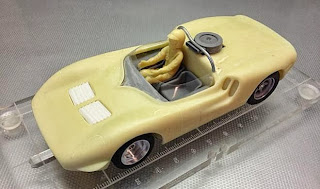 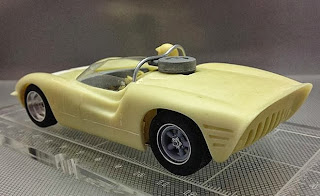 Parts and decals are included in the kit to build the 1964 Nassau Trophy or L.A. Times Grand Prix at Riverside versions. Proto-Slot kit PY-02 Adjustable Chassis can be used with this body (sold separately).

History:
The Hussein was a one off, built by John Mecom's race team and sponsored by Zerex (an anti-freeze product made by the Dupont Company). John Mecom's father was an oil wildcatter based in Houston, Texas. This racing car was named for John Mecom Sr's customer King Hussein of Jordan.

The Hussein is based on a strengthened Cooper Monaco chassis and it features a 426 cu in (7 liter) Dodge power plant. The Dodge Hemi was originally designed for drag racing and later was adapted to NASCAR. This former NASCAR powerplant was worked over by Traco and develops about 525 Horsepower.

The Mecom Hussein was probably the most powerful sports racer of it's day with a top speed of well over 200mph, but the car was reportedly quite a handful in the turns even for "Super Tex".

In the 56 lap feature the Hussein spun out while leading the race, and eventually retired after 48 laps. In 1965 Mecom became the U.S.A. Lola importer and the Hussein never raced again.

Kaye Griffiths' big break in motor racing came when John Bonham, the drummer for Led Zeppelin, stepped forward to sponsor his car and helped to create the unique livery. The sponsorship deal was announced in January 1974 and began a string of top finishes in Europe for Griffiths during the 1974 season. 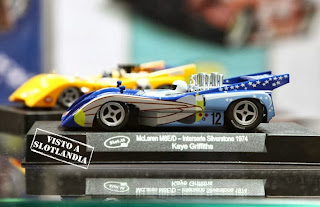 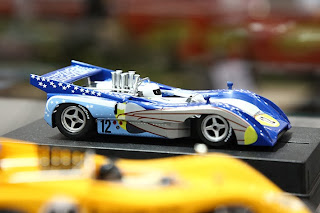 The Slot.it 1/32 version of the "Led Zeppelin" McLaren M8E/D (Prototype shown above) is expected on dealers shelves no later than mid-January 2014.