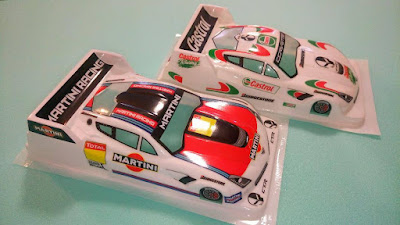 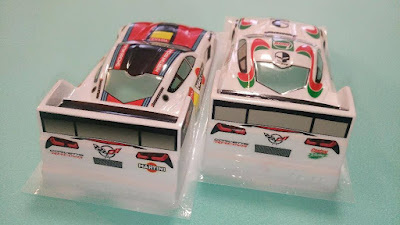 Please check with your local raceway for more information.
Also Betta and Classics stock the Minimax line and can fill your requests by sending an e-mail to ian@bettaclassic.com. 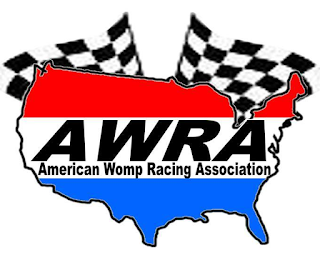 There will be a couple of rule changes for the 2021 season. These will be posted soon, but we wanted to get the word out early, particularly so that everybody can prepare Dirt Late Model WOMPS for the upcoming races.

2021 motor rules - We will be watching closely for tampering with motors.

The Euro-Spec class and the paper Modified class will be dropped.

That just about covers it We will be making updates on the rules page, the web page, and other pages soon. Until then, contact us for info.

The 1/8 and 3/32 square oilite bushing for this chassis will be shopping to distributors before the end of 2020. They will be $2.99 a pair with a full discount as well

As most of you know, Parma's legendary and wildly popular "FCR" (First Class Racing) brass chassis has been out of production and difficult to find for some time now.
P1 Slotcars is now offering this modern designed alternative to the venerable FCR 4 1/2" chassis.
Check out this video which explains the design and performance of the P1 "Python" brass chassis:
For more details or to order: P1 Slotcars
Posted by MG Brown at 4:51 PM No comments:

The AWRA 2021 season will start on January 2nd. Time to get those WOMPS ready to rumble!

The Dirt Late Model class will replace the Euro-Spec class in 2021.
The Dirt Late Models will race on ovals and the rules will allow bracing and other chassis modifications and any gearing.
The motor will be a JK Hawk 25 and the legal body will be a Caveman Bodeez Dirt Late Model. Tires will be Pro-Track Daytona Stockers front and back. 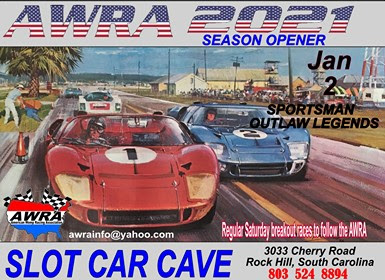 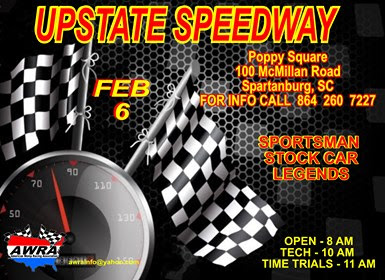 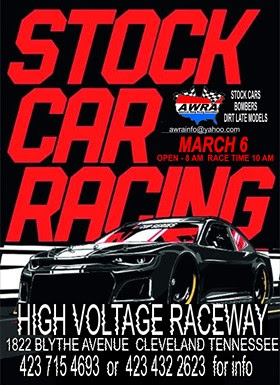 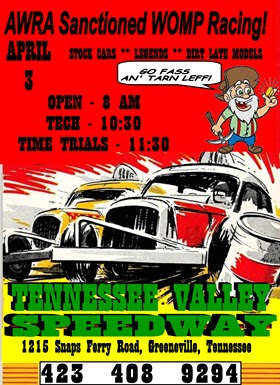 More information available at http://www.awrawomp.com
Posted by MG Brown at 6:16 PM No comments:

Rules will be available for download on the JK Products Box Stock Series Facebook page.
Please contact one of the raceways mentioned or JK Products with your questions.
Posted by MG Brown at 4:38 PM No comments:

John Cukras, one of the most famous of the salaried professional slot car racers from "the heyday" of the late 1960s has passed away due to complications from recent lung surgery. 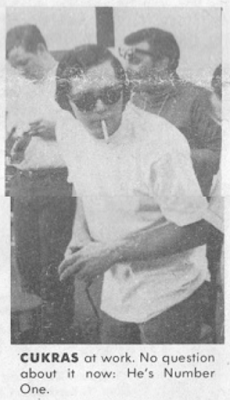 John was a heavy smoker during much of his life and most period photos show him with a cigarette held in his mouth while racing.

John was said to be paid a salary somewhere between $30,000 and $50,000 ($233,881.44 to $389,802.40 in 2020s dollars) a year for racing slot cars and various product development activities for San Leando's (CA) Mura slot car products owned by Ron Mura. Mura was at one time a well-known producer of slot car motors and other components.
The story goes that John at one time worked or consulted for Aurora plastics company and had a hand in the design of what became the A/FX line of HO slot cars that were enjoyed by millions. John was also involved in the design of the later G-Plus and Mega G-Plus HO scale slot cars.
John's fellow Pro racers felt that John was as close to a "natural" racer as anybody then or now. John was without question a force to be reckoned with in any 1/24th scale race he entered.
John really made his mark in 1966, winning the first "East-West" race sponsored by Bob Rule's Champion of Chamblee (GA) and held in Memphis, TN. This race was one of only 3 national championship races run with open-wheel or "formula" style scale race cars before the aerodynamic advantages of Can-Am style sports car scale bodies were realized.
Cukras was one of a handful of participants invited to visit Elvis Presley's hobby room at Graceland featuring a full-size 8-lane commercial slot car track.
John also took a well-deserved victory at the "Hemisphere" race in July 1968 held in San Antonio, TX. Winning this race made John the undisputed best of the best Number One slot car driver and builder in the world.
Model Car Journal described the Hemisphere race as "...violent, blazingly fast, immensely destructive sort of racing and nobody is better at it than Cukras". John's victory earned him $350.00 in cash which would be over $2,600.00 in 2020s dollars. The Hemisphere race IIRC was the first "pro" race won using the modern style Parma/Russkit pistol grip hand controller. Previous races were won with various types of thumb-operated controller.
John was the subject of an article written by Leon "Dutch" Mandel and published in Car and Driver magazine in early 1969. The article was entitled "Soooooo-krus...The Sound of Teenage Money" and was one of the best-known writings about the hobby/sport in mainstream media. The article is an interesting read and can be found in PDF form with a little web searching.
John was one of the members of the Southern California racing community that came up with the framework for "retro" slot car racing which eventually spread across the country and the world.
Cukras participated in an all-star retro race held at Buena Park (CA) Raceway in 2008 with many past Pro racers of legendary driving and building ability.
A few years ago on the Slotcar Superstar blog John wrote:
"I had what it took for this type of competition. Hand-eye coordination, depth perception, model-building skills, perseverance, super steady nerves, and a love of racing. The big races I competed in and often won were long events with hundreds of entries. One main event at a big race finished at 8:00 a.m. Easter Sunday morning after racing all through the previous night!" A giant of our hobby/sport has left us. Godspeed "John the Jet".
Posted by MG Brown at 9:00 AM No comments: