Six teams and 39 drivers participated in the long and grueling event. One team that had entered was a no-show.

Friday started off with all-day practice on the King track and most racers were quite busy dialing in their racing machines.

The engraved Hand Out Pro-Slot Double Ball Bearing Scorpion motors and Mid America Wonder Rubber Tires were handed out at 5 pm and all cars and extra tires and motors were etched and impounded at 8:30 p.m.

It was now up to the drivers, pitmen, strategy, and luck over the next 24 hours.

It's difficult to give a blow-by-blow heat by heat Race report due everything going on over the 24 hours, but here is a summary of the event.

Team Nomad was in first place after the 1st hour with Team Great 8 taking the lead after 2 hours and holding the lead into the 4th hour when Team Those Guys where leading at the end of 4 hours. Lots of changes were taking place in hours 3 and 4 as tire changes, Braid changes, oiling, etc was taking place for all of the Teams.

After 5 hours it was Great 8 back in front with a slim lead over Those Guys and Team MMW. Teams Mid America, Nomads and Michigan Mafia were having their share of problems and bad luck in the first 5 hours, but they didn't give up and kept repairing and fighting.

Over the remainder of the race, Great 8 continued to lead while Those Guys stayed close the next 19 hours while scrapping with MMW for 2nd a couple of hours while Mid America and Michigan Mafia climbed out of last place in the early going.

The Winning car traveled a tad over 582 miles at an average speed of a tad over 24 MPH.

BIG THANKS to Mark Kitto of MMW for hosting the marathon, ALL of the racers who put forth their best efforts, Pro-Slot for the motors, Mid America for the tires, and Ralph Thorne Racing for the event t-shirts and awards. 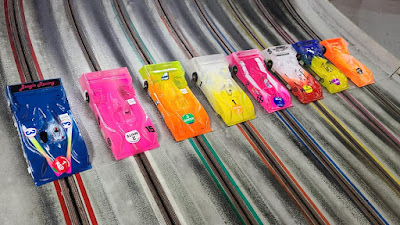 Save the Date & Mark your Calendars!!!!!