Morning practice is over and the race will begin in a few hours. Here's a link to a gallery of photos from morning practice I just shot. More photos later today.
Posted by DaveKennedy at 11:16 AM No comments: 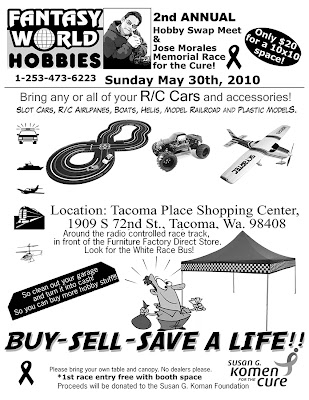 Posted by DaveKennedy at 7:48 PM No comments:

Photos of the new Carrera BMW and Audi R8 LMS

Posted by DaveKennedy at 12:49 PM No comments:

Posted by DaveKennedy at 12:02 AM No comments:

Photo tour of the AutoArt Koenigsegg

Some photos of the recently released Auto Art Koenigsegg CCX.

Posted by DaveKennedy at 9:28 AM No comments:

Just for reference. The question of "where to get ..." comes up so I thought I'd post this.

Greenfield WI-Greenfield News and Hobby
Posted by DaveKennedy at 12:00 AM No comments:

Several things to announce from Carrera of America.

Carrera of America has a Facebook page now too... if you're a member of FB please join the page.

The Source in Canada will carry the Disney "Cars" licensed set and the Mario DS2 Kart set.

Carrera will be bringing in a number of the recently produced DTM's in BOTH 1/32 and GO!!!
(pix soon) They will be available from the Carrera Race centers.

Posted by DaveKennedy at 12:45 PM No comments:

Some new Slot It body kits.

Posted by DaveKennedy at 12:03 AM No comments: 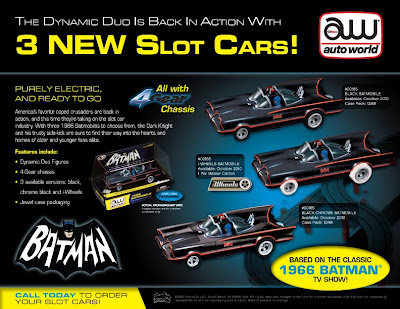 Posted by DaveKennedy at 12:15 AM No comments:

Win a ride at the Glen!

FOR IMMEDIATE RELEASE: Contact: Jon McKnight, 607.535.9044 office; 908.268.8368 cell; oldracerjon@gmail.com
Watkins Glen, NY (May 7, 2010) The International Motor Racing Research Center is pleased to announce an exciting, once- in-a-lifetime fund raising event called The Hot Lapz Experience as part of the Camping World Grand Prix at the Glen, IZOD IndyCar Series race, July 2-4, 2010 at Watkins Glen International. Three separate Hot Lapz Experience packages will be offered on Ebay, starting on Sunday May 16th, over a period of three weeks. The three auction format will allow bidders multiple chances to win one of these exciting packages. Race fans interested in bidding should go to the Ebay website and enter the keyword Hot Lapz for a direct link to each auction as well as additional details.

Each Hot Lapz Experience includes;
-Three, at-speed, laps around the historic 3.4 mile Watkins Glen race course in race prepared Porsche Cayman, driven by IZOD Indycar Series driver Ryan Hunter-Reay, winner of the 2008 IndyCar Series race at the Glen, and driver of the #37 Team IZOD, Andretti Autosport, Dallara. A truly priceless, once-in-a-lifetime, experience
-Exclusive Crown Royal Club at the Glen VIP admission tickets for the entire weekend that includes infield parking, access to the pit and garage areas, buffet luncheon and complimentary cocktails for each winner and guest. Value $1000+
-Three nights of accommodations for each winner and guest at the Glen Motor Inn, overlooking beautiful Seneca Lake. A daily complimentary continental breakfast is included Value $750+
-A set of four Firestone passenger car or light truck tires for each winner. Value $1000
-An evening cocktail cruise on Seneca Lake aboard a private yacht . Participants will be able to view the fireworks display over the scenic Watkins Glen harbor. Value $500
-In addition, the highest overall bidder in the three auctions will receive two admission tickets to the Andretti Autosport VIP Hospitality area for the weekend. Value $500+
-Selected # 37Team IZOD racing attire for each of the winners and their guests.
-Invitation to the opening reception at the International Motor Racing Research Center for artist Douglas Wilkins’ exhibit, featuring works honoring racing legend AJ Foyt.
-A ride in the Pace Car around the Glen circuit for each winner & guest.

About Ryan Hunter-Reay:
Ryan Hunter-Reay began his racing career in karting in the late 90's, quickly wining three national championships. Hunter-Reay then turned his attention to open-wheel race cars where he shined in both the Barber Dodge Pro Series and Toyota Atlantic Series. In 2003 he moved up to the Champ Car World Series and became the first American Rookie in 20 years to win a race with his victory at Surfers Paradise, Australia. He also scored a second Champ Car victory at Milwaukee in 2004. Now an IZOD IndyCar Series standout, Hunter-Reay has scored victories at Watkins Glen International in 2008 and most recently at the fabled Long Beach Grand Prix in April of 2010. He is currently the driver of the number 37, Andretti Autosport, Team IZOD, Dallara and is featured prominently in IZOD's print and television ads.
Ryan has proven his ability in sports cars as well, winning the GRAND-AM Rolex Series season finale at Miller Motorsports Park in 2007, finishing eighth overall in the Rolex 24 at Daytona in 2008 and scoring a hard fought 3rd place finish at the 2010 Rolex 24 race.

About the International Motor Racing Research Center:
The International Motor Racing Research Center, located in Watkins Glen, NY, is an archival library/museum whose mission is “collecting, preserving and displaying the heritage of motor sport”. Opened to the public in the summer of 1999 The Center serves serious researchers as well as casual enthusiasts with an ever-increasing collection of books, periodicals, photographs, videos and other memorabilia associated with all forms of motor sports. At the core of this collection are more than 3500 reference books, thousands of films, videos, posters, club & race team records, programs, and over 100.000 photographs. The operation of this truly unique facility is supported entirely by donations and gifts from motor sports enthusiasts throughout the world.

The Center is open year round, Monday-Saturday from 9AM to 5PM. Information regarding upcoming events, recently received collections, gift items, etc can be found on the Center's website, www.racingarchives.org.
Posted by DaveKennedy at 10:45 PM No comments: