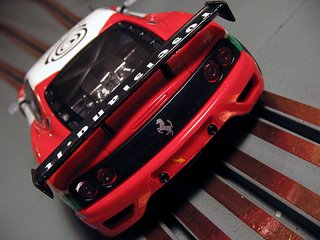 Where to begin.... The Ferrari 360 Modena is a fantastically fun car, I just couldn't hold that in for much longer. Even before I opened the case I knew I was in for something special. 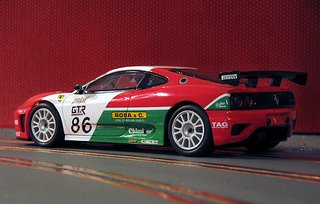 The red and green Rose Island livery is striking. The color on the car is opaque and the colors are vibrant. All the printing on the car is complete with no breaks or miss-printing anywhere. There are plenty of areas on the body where you'd think there might be an error. For example the names of the drivers on the car which are printed on the "a" pillar (which are printed in about 1 or 2 point type) are clearly printed and easily readable, no small accomplishment. Further, the body is painted red as a base color and then covered with other colors and then clear coated. A personal pet peeve of mine is a body that is cast in color and then NOT painted over with more paint to add that basic level of detail that makes a car look less toy-like. 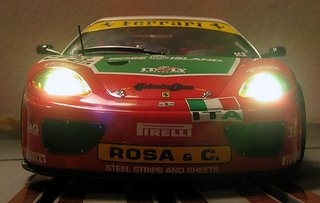 The lights on this car are very bright, in fact almost by accident I found out that you can actually race the car in the dark using just the car's own headlights. 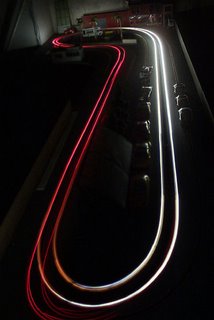 The wheels are nicely modeled, the wing is in proportion and the tail light lenses are nicely molded and all of the external body pieces are free from any extra plastic flash. 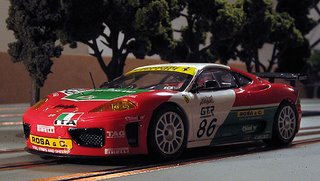 The model of the motor alone is almost worth the price of admission. AND more importantly, SCX chose not to include a nicely done motor in the rear window of the car at the expense of the internal workings of the car. So many company's have chosen to make a full interior on cars that add tons of weight and come at the expense of the mechanical integrity of the cars. This car has a half-pan interior, and boy am I cool with that. Most every car should have this design as far as I'm concerned. 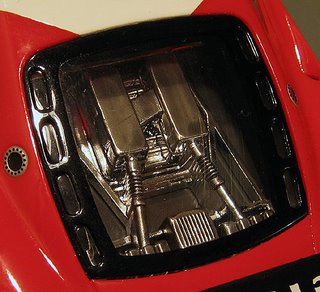 Nine-tooth pinion, 27 tooth crown gear are standard on this car. But for such a slow turning RX-41 motor higher gearing might add a bit of speed. For a GT car the motor in this car is perfect. When you put this car through it's paces around the track there is some gear noise, but it's easily deadened with a piece or two of duct tape on the bottom of the interior pan. 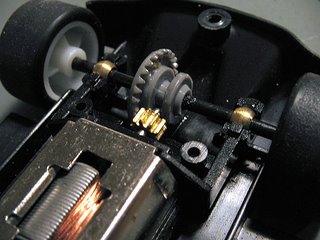 The car has a tilting motor pod, the pod rocks on 2 small plastic stubs. The design of the pod does not allow any adjustment to the amount of travel in the motor pod. But like some racers do a piece of tape on the bottom of the car to limit the rattle. Over the life of the car this might be more important since the pod will loosen up as you race it more. The rear axle is held in place by 2 arms on the rear of the pod. 2 small brass spherical bearings hold the axle firmly in place and make a nice mesh between the pinion and crown gears. The chassis is very, very flexible and if you remove or loosen all 5 (yes 5!) body screws the chassis has plenty of room to move on its own. 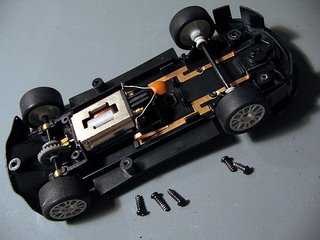 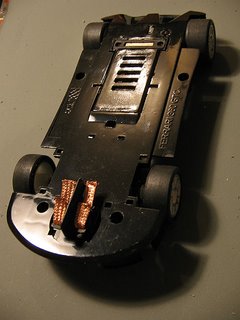 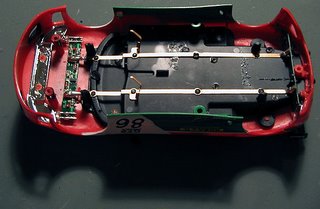 The tires on this car are a high point. The compound they use sticks to everything well. On both the plastic Carrera track I tested on and my own wood track (painted with flat latex a few years ago and now "rubbered" well), the stock tires stick like crazy. One small detail on my test car that I was unhappy with was the front axle. It was very, very bent. And caused the front tires/wheels to wobble a lot. But since the rest of the car is so well put together, and so well thought out that I'm not upset at all that I'll have to replace the front axle. 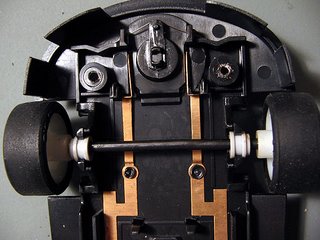 A track test on the 67 foot long Carrera track at Bud's HO in Cortlandt Manor yielded laps around 6.5 seconds. I did many laps on the track most of which I'm sure where much faster than the few timed laps I did. The nose of the car felt a bit light and every time the car deslotted, the nose hopped out. And since the wobble was discovered I'm thinking that the sliding out will be eliminated if this small detail was fixed. The magnet holds the car firmly on the track, but some magnet fans might find the stock magnet a bit light. I was able to drive the car around the track and slide the tail out with confidence that the slide was recoverable.

On my wood track the wobble in the front was more pronounced but still the car was very fun to drive and was very fast. The cornering speed of the car makes it fast on my track. The motor and gearing on the car limit the straight away speed. But that's ok, what I give you on the straights, I'll take back on the turns.

A word about the ProSlot 360 Modena versus the SCX car. The SCX has a much more pleasing shape and obviously more detail and the ProSlot has a slightly shorter wheelbase. 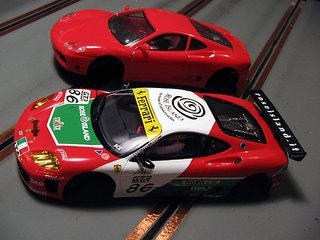 So, what's the verdict? Well aside from the axle, there's nothing NOT to like about this car. There is tons of potential in this car to turn into a serious racer (if that's your bag) or just leave as it is and blast around the track against any other modern GT car (now where did I put my Aston Martin DBR9?). And the car offers more detail than more expensive cars...what's not to like? 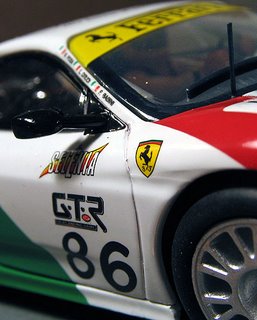 A huge thanks to Gene of Slotcarplace.com for the car. And also thanks to Robert at Bud's HO in Cortlandt Manor for track time to test the car.

Dave, Nice job with your Site and nice Ferrari by SCX!......Mcmannix

Another great review, Dave! I look forward to hearing about a matchup with Robert's Aston. I am also curios if the tires you liked so well on the 360 are the same as those which slid so much for Robert?

I'll sure be interested too. I hope the tires work on Rob's track. I'm always in search of "another" tire to use besides just Ortmann's.

And thanks for checking my site out guys. I appreciate it A LOT!