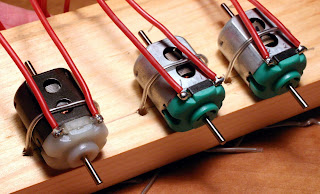 The two Blue Endbells are better described as turquoise, or aqua. Both Blue Endbell armatures are balanced with epoxy, and have long shafts on both ends, like the venerable 23k they replace in the Slot.It lineup. The little Sun motor insignia (a stylized S) no longer appears on the endbell, replaced by Slot.It in an oval. I noticed the shaft has about .001" sideplay; it seems loose in the end bell bearing. Closer inspection revealed that the bronze bearing is a close fit on the shaft, but the bearing itself is loose in the plastic endbell. Both motors had loose bearings. The can-end bearings are tight. Whether this will affect performance in a slot car remains to be seen. Nevertheless, I proceeded with the test. I ran all three motors on 6 volts for 45 minutes to bed-in the brushes and bearings. The Blue Endbells barely slowed as I squeezed the shaft between my fingers; the Black Can slowed right down under finger pressure. Obviously the new motors are putting out more torque.

I then ran all three motors up to 12.00 volts, letting them settle in to the higher voltage for 5 minutes or so. The tachometer read 19,499 RPM for the so-called 23k Black Can, and 19,232 and 19,450 RPM for the 19.5k Blue Endbells. I have tested several Black Cans in the past, in proxy racers and in my own cars; the better ones rev to 23k, and even surpass 24k for a good one. I have encountered 19k Black Cans, though, so the new one I have in front of me today is one of the slower ones made. Bear in mind that a standard Scalextric or Fly motor will rev in the 20k to 21k range, and produce 75 gcm torque. The Blue Endbells are close to the advertised RPM, with obviously healthy torque.

Torque testing with my arm-and-scale showed an average of 124 gcm/12v for the 23k Black Can, and 150 gcm/12v for the Blue Endbell. The Black Can had been advertised as a 23k motor, and 83 gcm; this sample makes up in extra torque for the lower than claimed RPM. The Blue Endbell is twisting with an extra 20 gcm over the advertised torque (130 gcm), and revs nearly the same as advertised.

Conclusion: Gear it high, and go fast with the Slot.It Blue Endbell, in 19.5k limited rev competition.
Posted by Robert Livingston at 12:05 AM

so this car accomodates upto 2 epoxies if im not wrong?