March 21, 2009 -- Sebring, Florida -- The Flying Lizard No. 45 and No. 44 Porsches finished their sixth consecutive Sebring race fourth and fifth in GT2, respectively. The twelve-hour race was another contest of will and endurance: nearly half of the starting cars were no longer running by the end of the race.

With Joerg Bergmeister in the No. 45 starting second and Seth Neiman in the No. 44 starting 13th on the GT2 grid, both Porsches ran into trouble within the first ten minutes. The clean race start quickly turned ugly for the Lizards when on the fourth lap the No. 45 was hit by another GT2 car, causing rear suspension damage to the No. 45. The Lizard crew made the repair in the pits but the lengthy stop dropped the No. 45 from third to 13th. Meanwhile, the No. 44 had its own issues with an early race spin which sent it back to the pits for an unscheduled pit stop and fresh tires. 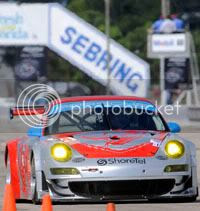 Over the next 10 hours, both Lizard Porsches cycled through their drivers, who patiently worked their way up from the back of the field. The 12-hour race had only three cautions, making it more difficult to find opportunities to regain lost laps or gain time in the pits. But by hour 10, the No. 45 Porsche was in fourth (Bergmeister, Patrick Long and Marc Lieb) and the No. 44 (Neiman, Darren Law, and Johannes van Overbeek) had recovered to fifth, with the No. 45 (Marc Lieb) having set the fastest race lap of 2:02.494.

At hour 10, the No. 62 Risi Ferrari was in the lead (having led most of the race) and the No. 95 Advanced Engineering Pecom Racing Ferrari was in second. The No. 21 Team PTG Panoz in third. The No. 45, with Marc Lieb at the wheel, was running a faster pace than the No. 21, and worked over the next hour to overtake the No. 21, putting pressure on in the corners, but losing ground on the long straights and to traffic. Taking an opportunity to pass, Lieb moved past the No. 21, but was not able to complete the pass, and the two cars made contact, with the No. 45 spinning into the tire wall. Although the radiators were not damaged and Lieb was able to make it back to the pits, the crew had to adjust bodywork, replace all four tires, but then was unable to fuel the car because of the damage to the hood. With Joerg Bergmeister behind the wheel, the No. 45 went out on track again, then pitted one more time for additional repairs and refueling. He was back on track again quickly, having lost just one position to the No. 44 with Johannes van Overbeek at the wheel, which moved to P4.

With the car nearly undrivable, Joerg was able to maintain a fast enough pace over the final hour to keep fifth and stay ahead of the No. 61 Krohn Racing Ferrari in sixth. The No. 44 was in fourth, but lost time in the pits with a late race pit stop, and finished fifth, just behind the No. 45 which took fourth place. The No. 62 Risi Competizione Ferrari won in GT2, the No. 95 was second, and the No. 21 third.

Team principal and driver of the No. 44 Porsche Seth Neiman said, "This was another classic Sebring -- a race where you have to give it everything you have just to finish. A podium spot was not in the cards for the Lizards this year, but I'm proud that both cars finished the race in the top five. It was unfortunate that the No. 45 was knocked back so far in the field so early in the race, but a testament to the crew and to Joerg, Patrick and Marc that they came back not just once, but twice during the race to finish fourth. The No. 44 also had a rough start, but together with Darren and Johannes we were able to climb back up to fifth. Congratulations to Risi Competizione on their well-deserved win and seamless race."

News and photo used with permission from Flying Lizard Motorsports, no reuse for any reason.
Posted by DaveKennedy at 8:23 AM