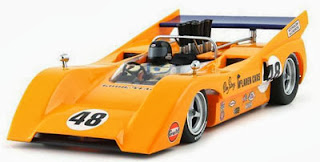 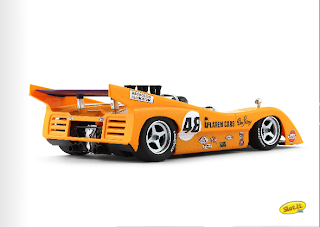 Here we see the first "production" photo of the long-awaited Slot.it CA26a McLaren-Chevrolet M8D as driven to victory by Dan Gurney at Mosport in 1970.

The Mosport, Canada race was the first event of the 1970 Can-Am season, and the first for Gurney as an official McLaren works driver (having driven the McLaren backup car to 3rd at the 1969 Michigan Can-Am race). Gurney replaced McLaren founder Bruce McLaren after he was killed in a testing accident developing the M8D.

Gurney had never driven the M8D prior to the Mosport race and won over Jackie Oliver and the Ti22 who fought a close battle for the overall victory.

Shipments to dealers are expected in mid-October. This release will be followed by the CA26b "Led Zeppelin" M8D in the first quarter of 2014.

Photos Courtesy of Slot.it.
Posted by MG Brown at 11:32 PM