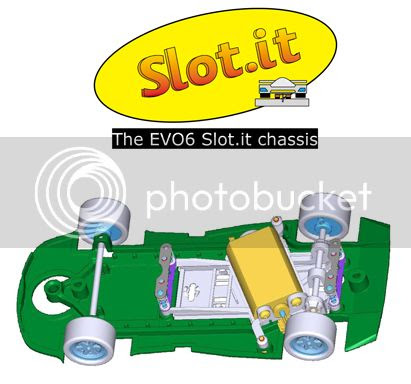 The EVO6 Slot.It Chassis
Slot.it announces the EVO6 evolution of anglewinder chassis and motor mounts - a milestone and a step forward for the company. The familiar 4 screws design of any Slot.it motor mount has evolved in a 6 screws design – where two extra screws have been added midway between the front and rear existing posts. The EVO6 parts maintain compatibility with all existing chassis and motor mounts as well: EVO6 motor mount can be used on old chassis, where it will behave like a standard 4 screws Slot.it motor mount and the new 6-screws chassis is as well compatible with the old motor mounts. The EVO6 advantage of course is only available if both parts are of the EVO6 type.

All RTR GT cars from Slot.it (Audi, McLaren, Nissan) from now on will come standard with the EVO6 chassis, but still with the standard inline motor mount as always. An exception will be the RAW series, which will be extended to other GT models as well, which will be assembled with the new EVO6 motor mount and chassis. Note that for a limited time, the new cars (Audi R8C n.9 and F1GTR Gulf) will come with a standard EVO1 chassis assembled in the car and an extra EVO6 chassis under the base. As these two model cars were already assembled when the EVO6 chassis became available, we've decided that it was a nicer gesture to provide new cars with state of the art chassis rather than delivering cars with old chassis and at the same time announcing such a radical improvement. 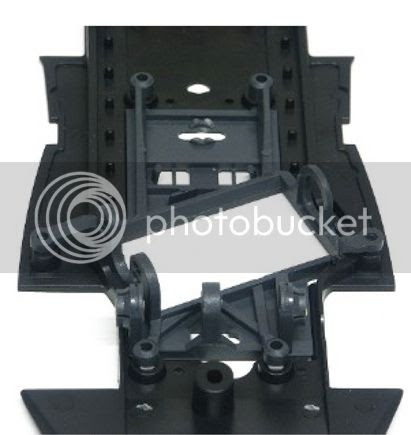 From a Slot It press release:
Q: what is it?
A: The familiar 4 screws design of any Slot.it motor mount has evolved in a 6 screws design –
where two extra screws have been added midway between the front and rear existing posts.

Q: when was it first designed?
A: Already in 2005, when Slot.it filed and obtained a patent in Italy and Spain for its angled motor mount, before anyone else came to the market with a similar system, the EVO6 design was filed for protection as well. Eventually, all the necessary tooling modifications were made, and extensive testing gave excellent results.

Q: So what is the reason for this evolution?
A: By looking at the part from above, it can be seen that the position of the rear axle is between the new set of screws, and the old rear one. The motor mount can then be attached to the main chassis with 4 or 6 screws. With 4 screws only, there are two options: use the front and rear screws, which is just like a standard motor mount, or move the screws forward, to the mid position, thus leaving the back end of the motor mount floating. In this configuration, the behaviour of the car is radically different from the standard setup, as the motor mount can flex under the various forces that act on the car: depending on the grip and setup of the car, it might work very well or hop might happen, which is not unexpected. However, the EVO6 uniqueness is that suspension can replace the rear screws: this gives the racer an absolutely precise control on the amount of flex of the motor mount, something previously unavailable to slot racers. The increase in traction and smoothness is absolutely remarkable. For racers who like to use the Lexan interiors, an even better option is to use 2 sets of suspensions: one in front (lexan interiors leave plenty of space), very soft and with short run, and one in the rear, whose amount of run and stiffness can be fine tuned at will. We are launching stiffer springs at the same time. Further, when the car is travelling straight, the suspensions keep the proper alignment and riding height of the motor mount and main chassis, which is better and more predictable than standard loosen screws.

Q: How does it affect lap times?
A: This is a question with many answers, as a lot depends on setup, driver, track type. Our tests in a club Ninco track of approximately 10” all other things being equal, show a lap time improvement varying between 0.1” and 0.3” (average on stints of 50 laps). Your mileage might vary.

Q: What models will come with EVO6 chassis?
A: Right now, Audi, McLaren, Nissan. The Ferrari F40 will not be made EVO6 ready. Regarding Gr.C, we are currently studying each model to see what is needed to make it EVO6 ready. In any case, wherever possible, all future chassis will be EVO6 ready.

Q: are the RTR cars going to change?
A: whenever possible every new chassis will be EVO6 ready, but the box stock motor mount will remain as it is. An exception of course are the RAW models which will come with EVO6 motor mount and chassis. McLaren and Nissan RAW models are being planned.

Q: are the new EVO6 chassis compatible with the old motor mounts?
A: Yes, 100% compatible. Of course the two extra screws being absent, there will be no change in the performance of the standard motor mount.

Q: the new EVO6 motor mount is a 0.5 offset. Is Slot.it going to issue the 0.0 and 1.0 versions as well?
A: Nothing has been decided yet. Technically, it is possible.

Q: are these chassis going to be used in the European Championship?
A: Certainly not in 2010. For 2011, we'll see but it is not a priority. 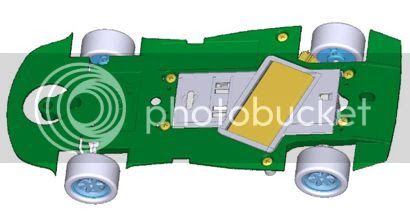 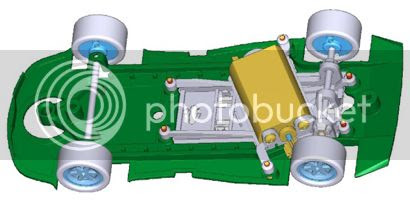 Posted by DaveKennedy at 8:01 AM