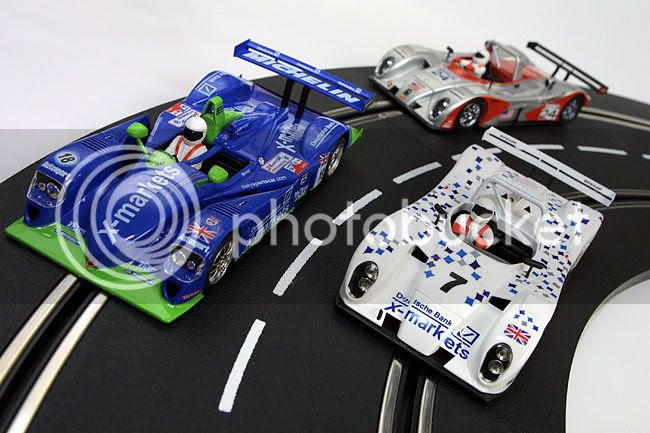 Spirit and Kimrey Enterprises has sent 3 of their latest offerings to Slot Car News, 2 Reynards and 1 of their Dallara's arrived in time for a pre-Christmas review. All are the non-sport versions of the car, but they don't come up short even when compared with the sport cars. 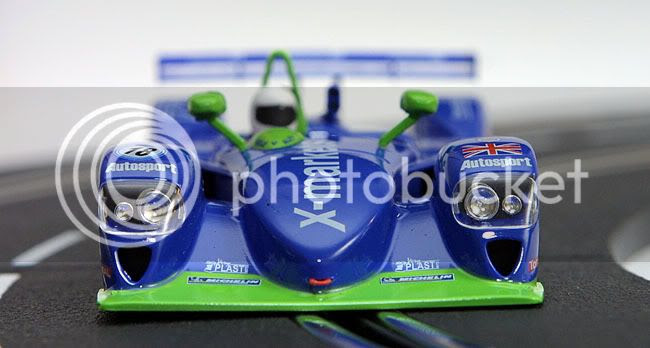 The bright blue Dallara is a striking car visually, but even more so when you get it on the track.

The testing for all these cars was done on the East New York Raceway with power set at 13.8 volts. The stock tires were first tested for a few test laps, they didn't stick well and yielded a 6.8 second lap time around the 61' lap length. Not terribly fast but then Ortmann rubber works best here so the tires were replaced. Within a few laps something was evident...this car is freakin' fast! The laps quickly got faster and faster, and before you know it there was a 5.08 lap appearing on the computer screen...we're talking about some serious speed here. The car whipped around the corners and howled down the 16' straight and was still wanting to speed up at the end of the straight. Tires on this car are everything...find a compound that works on your track and you'll have a winner.

Some testing with a Magnet Marshal yielded the following data. The hard plastic body weighs 22 grams alone, the whole slot car weighs 87 grams. And the magnetic downforce was 116 grams. 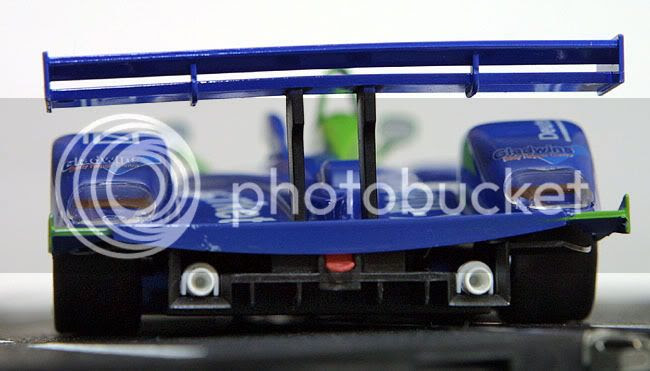 One of the reasons for the speed of this car may be due to the fact that much of the car "lives" below the tops of the tires. It's mass is more below the level of the tires than most of the slot cars. 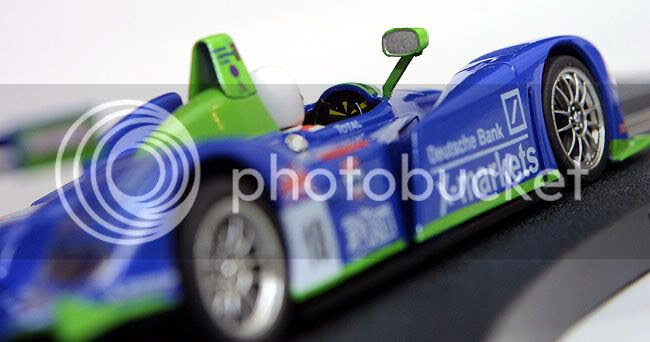 The paint on the car is well done as is the printing, nothing to take away from the overall look of the car or nothing to catch the eye as a blemish. 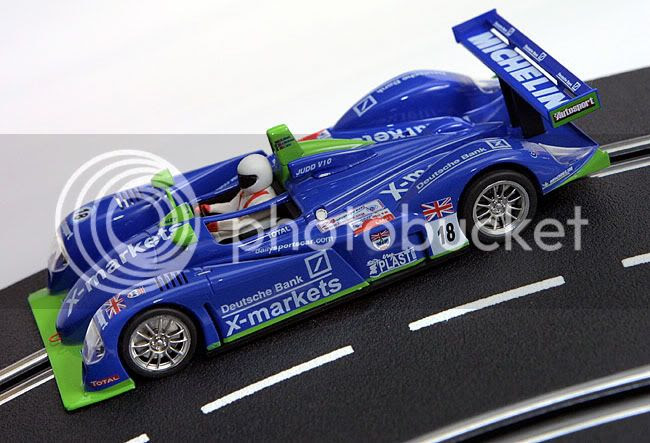 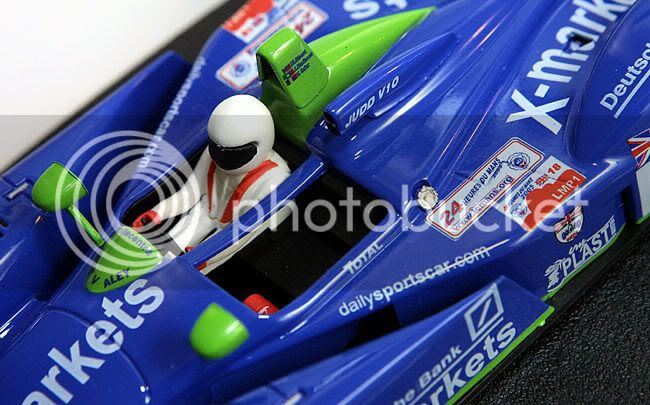 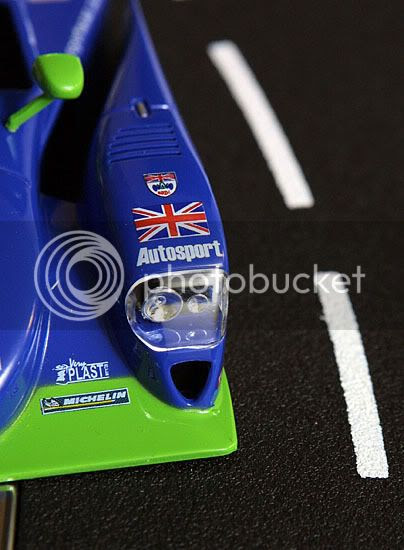 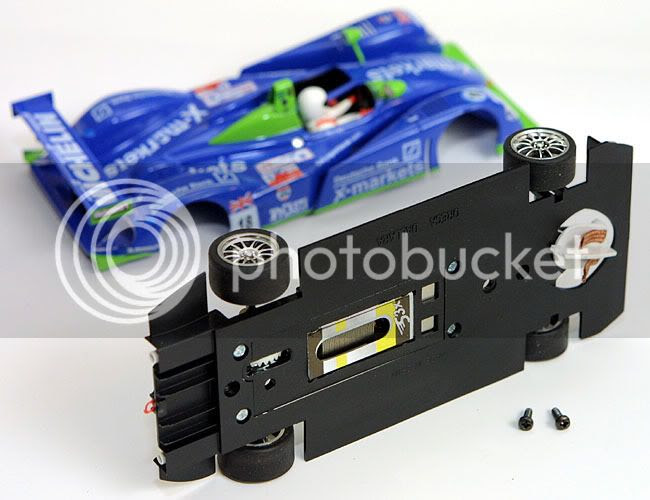 If you're into a car with a motor pod, then this car is for you. And yes it's a non-sport car technically. Even though it has a pod it does not have set-screw metal wheels. But it does have a sport guide in place which is adjustable with a screw rather than a press in fit.

The wheels on the Dallara have the same rib size as other common wheels and the same rib as the sport wheels. I'd call it a standard size that most would recognize as compatible with the Slot It wheels/tires. A very common size of rib that makes a wide variety of tires useable on this car and the sports versions of Spirit cars as well. 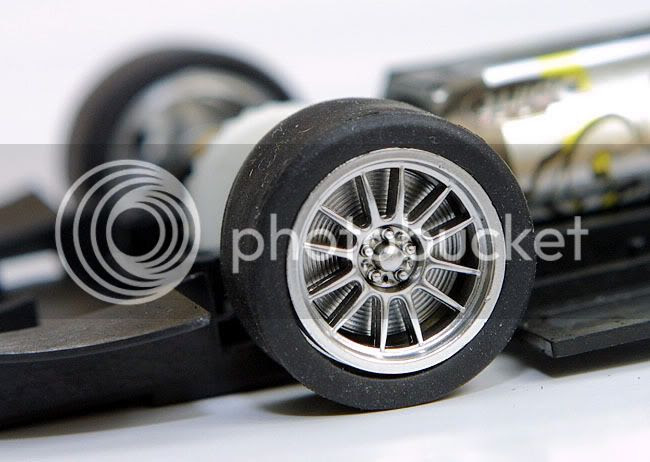 There are differences between the non aren't limited to the obvious lack of aluminum set screw wheels on the standard versions. Both cars have their differences from each other aside from the bodies.

I've cut and pasted the descriptions directly from a recent email with Jose at Spirit:

"Reynard Standard Series: Mounts chassis without pod and the motor SX01 (short box). This model can not mount the long motor S3X because of the complete plastic cockpit. Axles and crown are the same calibrated parts mounted in sport series. The guide is the standard one, without screw. Body is painted and decorated. Rims are plastic and detailed.

Reynard Sport Series: Mounts chassis with interchangeable pod and motor S3X (long box). Also mounts light lexan cockpit and aluminium rims. Body is painted and decorated. The guide is call “Sport” with screw and is injected in a mix of nylon and fiber to reduce the rubbing. 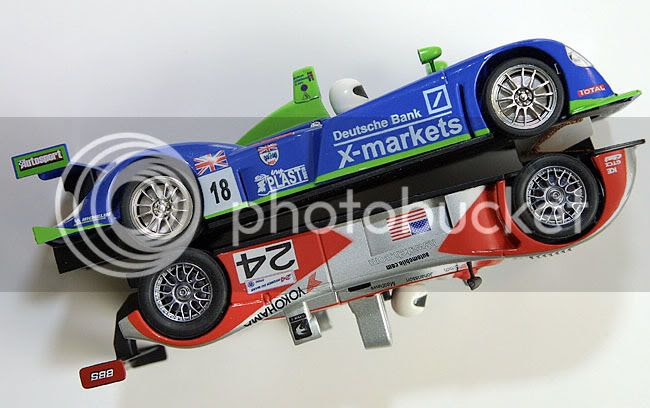 From this photo you can see the Dallara body is a bit longer than the Reynard.

The Reynard body's are close to the Sport version I recently tested with a few minor details. Some body features like air inlets and obviously livery details and the Lexan vacuum formed interior are missing in the standard (non sport) versions of the cars. I do like that generally the bodies are the same though. It give those that choose to purchase the standard versions a high quality body that doesn't differ in quality or race-worthiness from the sport version, very cool. 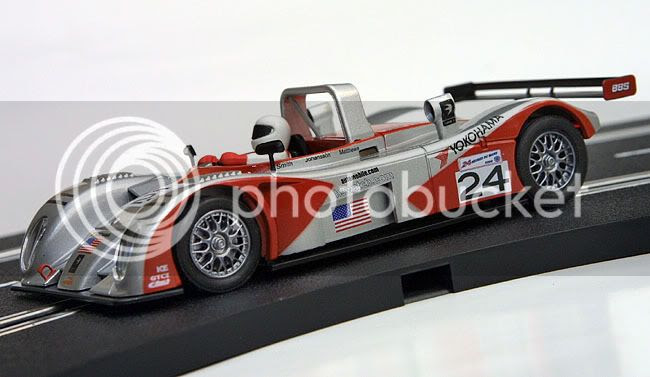 Again measurements taken with the Magnet Marshal were taken before racing. The body alone was 26 grams, the whole car was only 78 grams...lighter than the Dallara! And a surprise was that the magnet provided a very sticky 230 grams of downforce. 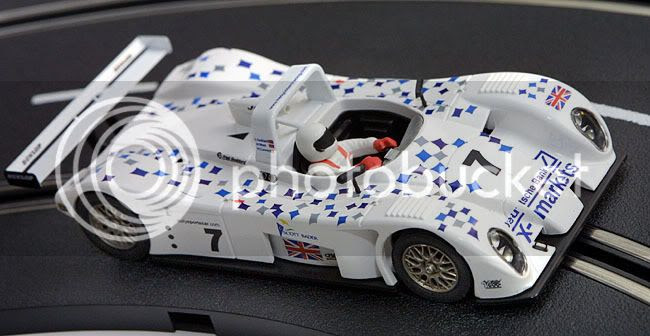 The wheels are a much larger diameter than the Dallara wheels and the tires aren't interchangeable. Personally I'd like to see the sizes of tires and wheels standardized, but that's just me.

Testing was done first with the stock tires in place. Times with the stock tires were around 6.7 seconds. These tires feel like a different compound than the Dallara tires and the sport version of the Reynard tires. They were very tacky to the touch and in fact maybe gripped a bit too well since a small amount of hop was easily achieved as you rounded the corners. Also the tires are hard to sand so if you're hoping to true them this might take some time.

To change the tires to get faster times, I swapped the rear end of the Dallara into the Reynard, which was an easy snap in that took only a few minutes.

After that it was off to the races. The car was first tested with Slot It S2's, which gave us times around 5.44. And a very smooth ride around the track. With a change to Ortmann rubber times dropped even further and bottomed out at 5.35 seconds. 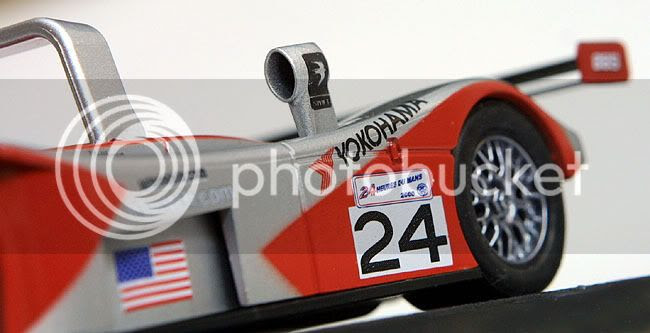 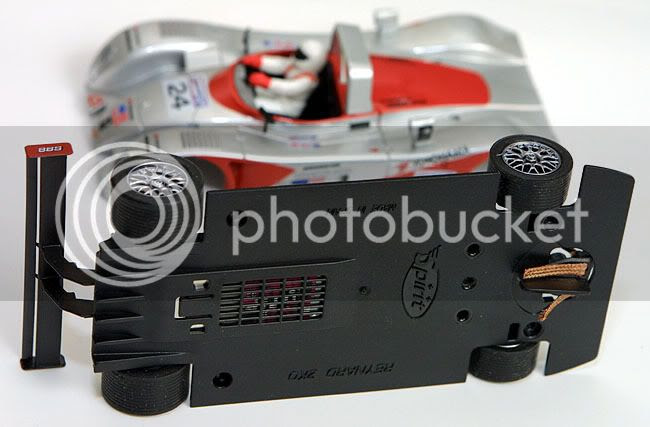 The chassis on both the Reynards are a flat sheet with no pod (as was noted above) with the SX01 motor, a 24k S-Can type motor. The lower torque of this motor makes this car a great driver and very different than it's cousin the Dallara and these cars I find to be much more "forgiving" to drive than the cars with the SX3 motor.

A few thoughts and I'll wrap this up. Overall these cars provide slotters very fast and race ready cars out of the box. If you're into fiddling with cars, you'll find that these cars really respond well to tuning. With a little work they really turn into monsterously fast cars...and all without benefit of being technically "sports" editions.

Thanks to Spirit and Kimrey Enterprises for providing the cars for review.

DaveK
Publisher, Slot Car News
Posted by DaveKennedy at 1:49 AM

Hey Dave.....very nice write up as always....I too, a few weeks back did the review on the same car for MCR...I have always liked the Spirit LMP and one still holds the track record here....Id like to see the parts become more available here soon.Its true with some work as you stated these cars haul somw ass period...I liked the Boxer can better when I tested em...I got the sport/racing version here in silver/red #24 still in the case...........

Marc, thanks. I think the parts will be sold in the US in the coming months. I guess I'm just a "slow motor" kinda guy, I think that's why I liked the s-can a bit better. But I know most will immediately go for the balls-to-the-wall Boxer type motor.

thanks for looking in.
DK

Thanks for the review Dave, and what a superb pictures!!!

Well, well...thanks "J"... here's hoping for a great new year for Spirit! I'm thinking that "J" will approve of that idea!