The price of everything is going up. You have less money to spend on extra stuff...in my house the first thing to go (as it should be) is spending on non essentials. Slot cars fall squarely into that catagory. But this Artin American Thunder set puts a set back within the reach of many slot racers. 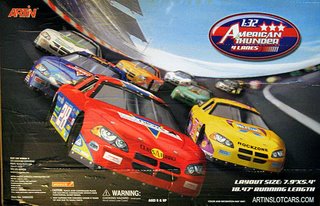 I was piecing the track together (not as the directions or box show you to...I'm such a rebel! Or is it dork?) but trying to get the most track on the floor as I could as quickly as my grubby little fingers could. Soon the track stretched around the dining/living room. I was whizzing around the American Thunder track as fast as the brakeless little Stockers would let me. What fun! I was struck by the lighter, non-neo magnets and how much I preferred them to their more sticky cousins. They hold the car just enough but not too much that you get a false sense of magnetized security. 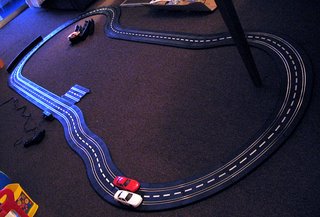 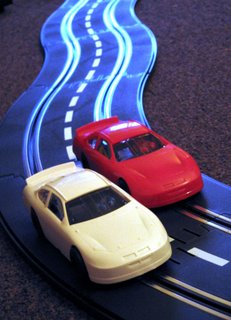 So the wifey came down the stairs and saw me in my slot car induced stupor...laughing as carrying on with the red Stocker (one of four...yes 4) and she sits down on the floor and grabs the controller and says she wants to race too! "Which one?" I ask..."the red one of course!" so ever the dutiful husband "the red one" is handed off. I grab the blue Stocker and now it's "Days of Danbury", we're racing side-by-side, laughing and trying to nerf the other into the fireplace. Damn this is entertaining! Yes folks, this one gets the wifey seal of approval. 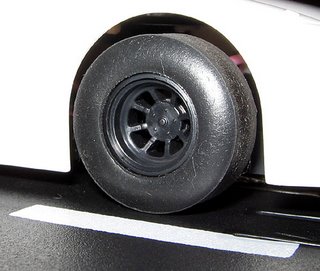 I took the red car to Rob's today and did some hot laps on the East New York Raceway, the tires stuck like crazy as they did on my track. You'd want your aftermarket tires to stick this well, but in this car...no mod's needed. They work as well as tires should on my circle of tracks.

Can you put a price on fun? Well, yes you can. Did you spend twice the money on track that doesn't lay flat? Not fun. Does this power supply work well with the track? Yes, more than adequate. The surface grippy, but not overly so. The pieces fit well together, and come apart easily when you want to disassemble the track. And the slot around the edge of the track makes it easy to put in thin pieces of plastic or cardboard and make your own fences! Again, don't know if this was a thought in the design process but it's a way to keep costs down so who cares! 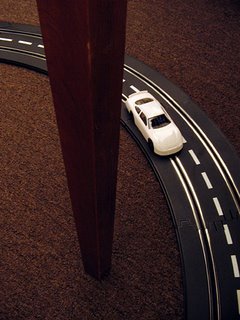 Sometimes it's about just having fun, not being a "serious" racer, actually it should always be about having fun... this set reminded me that fun is what it's about. I don't mean to overstate the issue of price the point is that the set is probably as inexpensive as sets should be, not everything has to cost tons of money to be worth it...and this set is worth it! 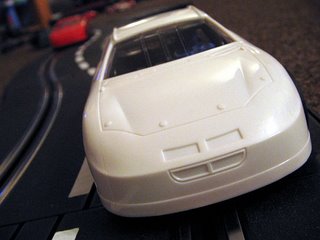 And none of this review would have been possible without the support, and of course, the track from Frank at Slot Car World/Artin North America.

A side note. If you'd like to know even more about this set, Harry at Home Racing World did a great review that goes into more detail about aspects of the set I only touched on.