SCX has stepped up their game recently and now they offer up an Audi Quattro. A dominant rally car in it's day, I'm not a huge fan of rally cars but this one might be worth a look. It sure looks nice from the photo! I wonder if this one will be AWD... 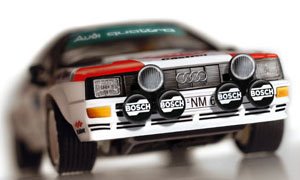 "SCX have announced a new Limited Edition car for release in October 2006.

The Audi Quattro A2 is from the 1981 RAC Rally, driven by Hannu Mikkola and Arne Hertz. The car is released to celebrate the 25th anniversary and is a Limited Edition model."
Image and ad copy courtesy of MRE.co.uk
Posted by DaveKennedy at 3:45 PM