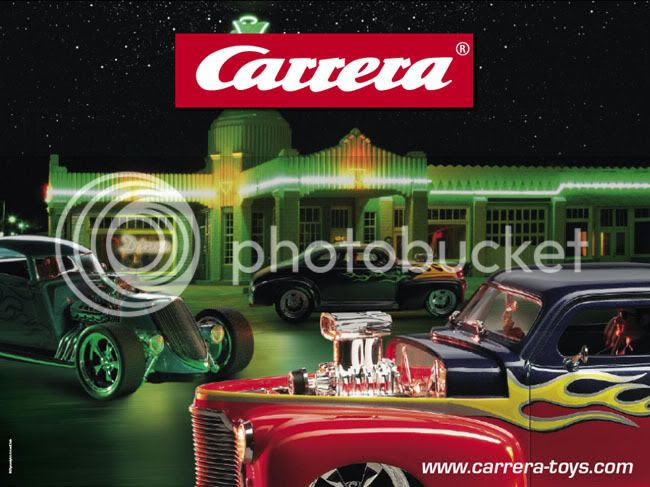 Once again, in 2007, Carrera's premium range, the 1:24 scale Carrera Exclusiv line, will be setting new standards. After adding a comprehensive range of tuning options for the vehicles, Carrera now gives pilots the chance to easily convert the entire system into a digital racetrack.

With the possibility of letting up to six cars race and overtake each other, pilots can now make a wider range of tactical decisions. With the help of an upgrade set containing a digital connector, two speed controllers and matching transformer, various Carrera Exclusiv cars from the 2005 range and higher can now be used in Carrera's new digital world, Carrera Digital (132). All that's needed is an easy-to-install digital decoder. This year, Carrera will also be introducing eight new top vehicles in authentic designs: the Porsche RS Spyder ALMS 2006 is available in two versions, as is the Audi R10 Le Mans 2006, which came in a sensational winner at the legendary 24-hour race last year.

For fans of classic automobiles, the Ferrari 330 P4, Equipe Nationale Belge, Spa 1967 has been added to the range. The Corvette C6R PSI Experience late 2006 and the two new Hot Rods, the ’34 Ford Hot Rod Supercharged Roadster and ’41 Hot Rod, make up the team of US racers. Several new cars have also been equipped with Xenon headlights and rear lights.

Boxed sets: the 6.6 metre length and fully equipped "Ultimate Challenge" racing set comes with the Audi R10 and the Porsche RS Spyder. The "Custom Rods" set presents a fascinating journey into the American world of tuning. On 9.3 metres of circuit, the’34 Ford HotRod and ’41 HotRod ensure that there is plenty of high-performance action and style for all enthusiasts of all persuasions. 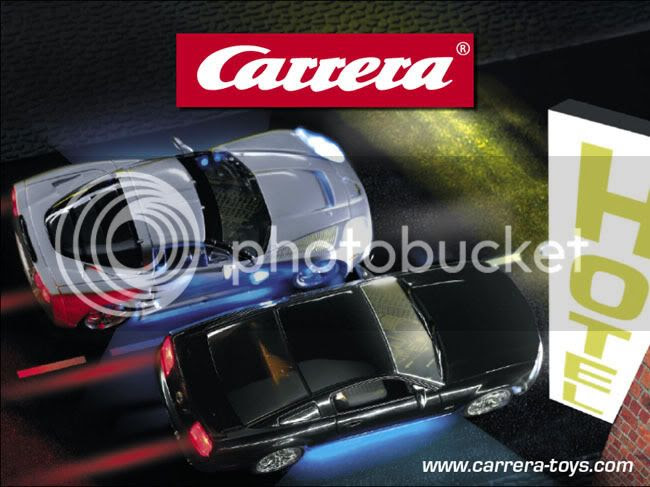 All in all, 25 vehicles from all motor sport disciplines, some equipped with luxury Xenon headlights and rear lights, will be taking to the starting line. Making its debut, the Audi R10 Le Mans 2006 and winner of the Le Mans 2006 championship will go down in history as the first "diesel" on the Carrera track.

Porsche fans can look forward to the Porsche RS Spyder ALMS 2006 and Porsche GT3 RSR, both sporting two designs, as well as the classic Porsche 935/78, Norisring from 1981. A dream car, to say the least. Another treat is the Opel Commodore Steinmetz Jumbo, a real eye-catcher in both of its two versions. The addition of the BMW Z4 M Coupe will put the finishing touches to the BMW range. And, bearing the drapeau tricolore, the Peugeot 908 HDi FAP will be representing France. With the ’41 Willys Coupe Hot Rod in three designs, the Hot Rod fleet can look forward to some powerful support on the circuit. Meanwhile, with its blinking siren lights, the ultra cool Ford Mustang GT "Fire Chief" will be commanding plenty of respect on the course.

This year, the Carrera Evolution range will also introduce five boxed sets to choose from: the "Sunset Race", with the Audi R10 Le Mans 2006 and Porsche RS Spyder, brings home the long-range feel of the 24-hour Le Mans race. Carrera Evolution's "Grand Prix" set captures the spirit of Formula 1 as the Ferrari F1 2005 "Nr.1" and the McLaren-Mercedes MP 4/20 "Nr.9" clash for the pole position and for the points. The ever larger flocks of DTM (German Touring Car Championship) fans will be congregating by the massive "Nurburgring" set. This 6.3 metre length circuit will stage the duel between the breathtakingly authentically designed AMG Mercedes DTM 2006 and Audi A4 DTM, in "Audi Sport Team Joest Racing C. Abt 2005" colours. No less exciting is the "Le Mans Race" set where the timelessly beautiful Ferrari 512 BB LM JMS Racing LM 1980 and the Porsche 935/78 Martini Racing Porsche System LM 1978 touring cars can't wait to get started. Real eye-catchers are the two US dream cars included in the "Cruzin " set. The Ford Mustang GT 2005 Custom and Chevrolet Corvette C6 Custom, with their blue groundlight effects and chrome spinner wheels, will certainly make heads turn. 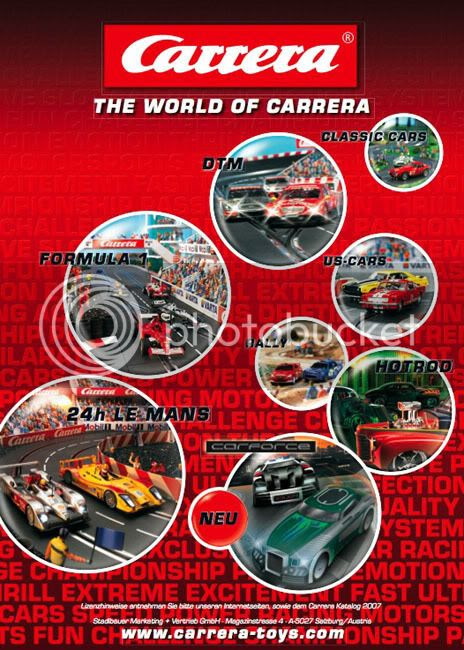 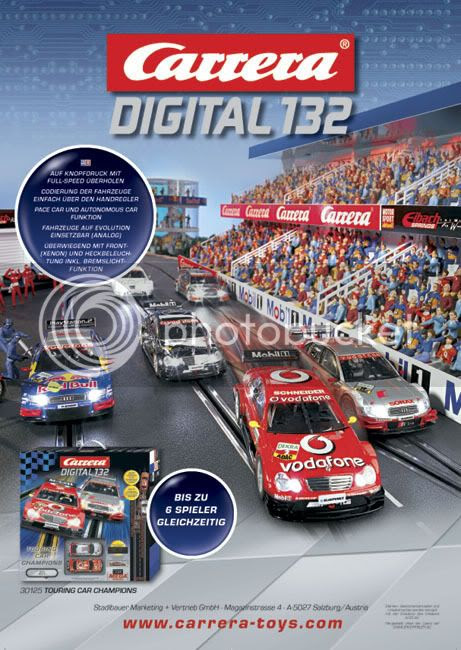 Carrera Digital 132 is the new name to watch out for! Carrera's spectacular digital racetrack lets up to six drivers battle it out at full speed. Tactical racing on the turns, high-speed overtaking, refuelling in the pit stops – Carrera Digital 132 makes the wildest racing dreams come true. What's particularly ingenious is the fact that the system can easily be extended infinitely with existing track parts and accessories from the Carrera Evolution and Exclusiv lines. On top of that, all Carrera Digital 132 vehicles can also be used on the analogue Carrera Evolution racetrack.

A stunning 22 new vehicles will be taking to the Carrera Digital 132 piste this year, including the first "diesel vehicle" ever to be seen on a Carrera track: the Audi R10 Le Mans 2006. Besides winning the prestigious 24-hour race last year, the authentically built touring car is now poised to steal the hearts of racing fans around the world. New to the tracks this year are also four power racing cars designed exclusively by Carrera for its very own CAR FORCE line.

The names of the cars – "Kaptera", "Tunnar", "Liguar" and "Carrex" - say a lot about what makes them special: individual, highly-charged, and sporting futuristic designs. The Porsche RS Spyder ALMS 2006 (Nr.'s 6 and 7), the Porsche GT3 RSR Spa 24h 2006 and Porsche GT3 RSR Team 2007 will all be representing Porsche. BMW will be sending its BMW Z4 M Coupe in two versions, and the Peugeot 908 HDi FAP will be sporting the French drapeau tricolore. Fans of US racing cars won't be missing out either: with the 41 Willys Coupe in three designs, the successful Hot Rods will once again be out in force. And the cool Ford Mustang GT "Fire Chief" is set to dominate the tracks with its blinking siren lights. Last but not least, the Chevrolet Camaro 2007 in silver and red is guaranteed to get lots and lots of attention.

Three new boxed sets round off the Carrera Digital 132 range for 2007. The "Formula Racing" set lets Formula 1 fans take their racetrack career to the limits in the world-famous racing series. "Touring Car Champions", which comes with the Audi A4 DTM and AMG Mercedes 2006, is dedicated to all touring car enthusiasts. And the new Carrera CAR FORCE models "Kaptera" and "Tunnar" will be making their debut on "Thunder Road".

New models, new sets, fantastic cars: this year, Carrera Digital 132 will see to it that even more fans will have more fun with the action, overtaking, and with the tactical possibilities the racetrack affords them. What's more, the analogue Carrera Evolution and Carrera Exclusiv racing systems are now easy to convert into digital racetracks. 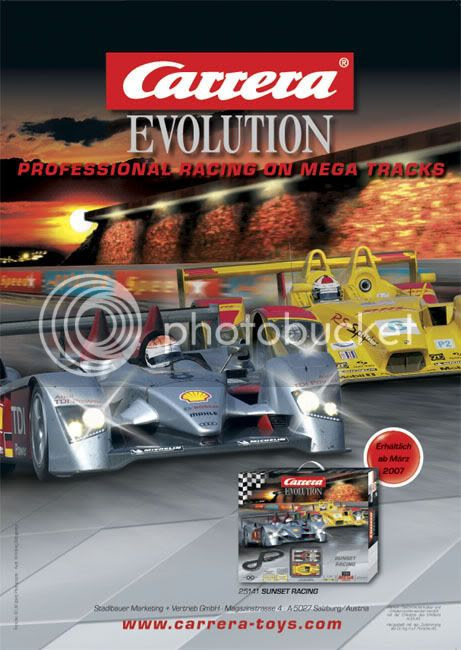 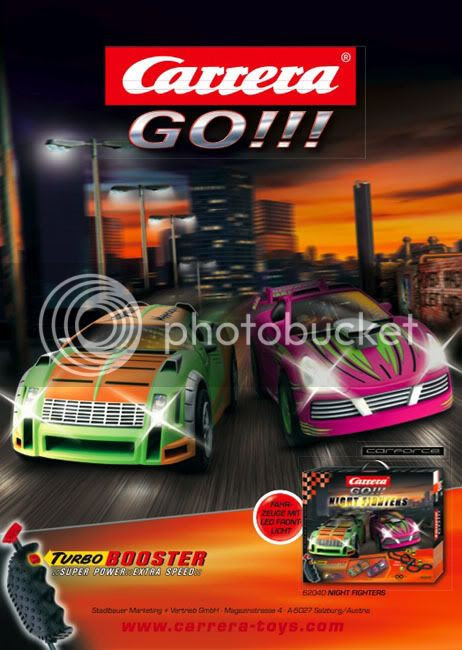 Carrera GO!!! – Colourful, Action-Packed Racing Fun for Young
and the Young at Heart

Top racetrack sets, top racing car models and Mario Kart as a top licence – in the 1:43 scale, 2007 is setting itself up to be brighter than ever for the wide world of Carrera Go!!! None less than Super Mario, star of Nintendo's world famous videogame series, will now be taking part in hair-raising high-speed duels on the Carrera racetrack, posied to break all lap records against his arch-rival Wario.

With its many action features, Carrera GO!!! has stood for action and excitement for years now. The excellent quality of tracks and vehicles and its legendary Turbo Speed Controller, for that little bit of extra push when you need it, make Carrera GO!!! the perfect introduction system into the world of Carrera.

New to the program are also four highly creative and robust new models from the Carrera's new CAR FORCE line. "Sorron", "Malok", "Austrion" and "Vinarra" bring fun, energy, and character to the racetracks. Joining them are lots of original licence models from renowned car makers, for example, the Porsche RS Spyder, the Peugeot 908 FAP HDi, the Citroen C4 WRC, the Mini Cooper S and the Subaru Impreza WRX.

A total of 15 new vehicles and six boxed sets will be available to choose from in 2007. Besides the fun "Mario Kart" set, Formula 1 beginners dig the "Formula Competition" set, and rally enthusiasts feel right at home with the "Rally Special Stage" set and its offroad-design tracks. The best introduction to the new Carrera CAR FORCE power cars, which come equipped with headlights, is with the "Night Fighters" set.

Together, the "Tuner Chasers" and "Highway Patrol" sets round off the range. Both feature a Porsche police car, complete with flashing blue siren lights, to ensure law and order on the streets.

The huge range of accessories for the Carrera GO!!! system also now includes a jump track, a 3D support system, rally tracks and an extension set. A narrow section, a lane change tracks, a crossing, a looping and a bridge guarantee unlimited racing action. With Carrera GO!!! building your own personal dream circuit has never been easier. 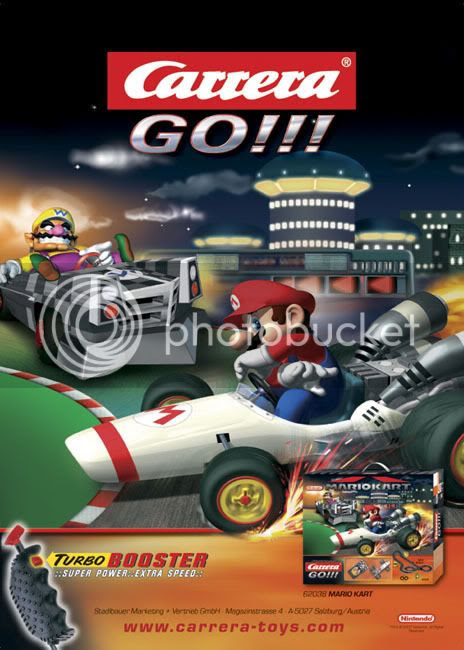