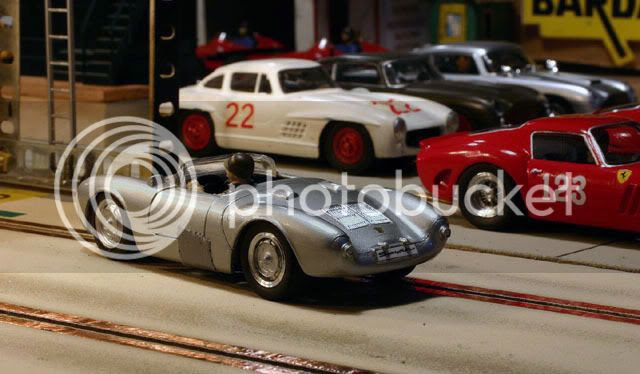 This is an experiment to see how a diecast body would work as a slot car. I used a Porsche 550A Spyder by Maisto, 1/32 scale, installed on an existing chassis. The chassis formerly had a plastic Porsche 356 coupe body, built to compete with Ninco Classics. Performance was competitive as a coupe; lap times were in the range of 6.1 to 6.4 sec.

After the conversion to Spyder, best lap time rose to 6.511, which is understandable, as the overall car weight went from about 88 grams to 140 grams. The die cast body weighs 74 grams, and the plastic body it replaced weighs 22 grams. Chassis is ~65 grams without a body. 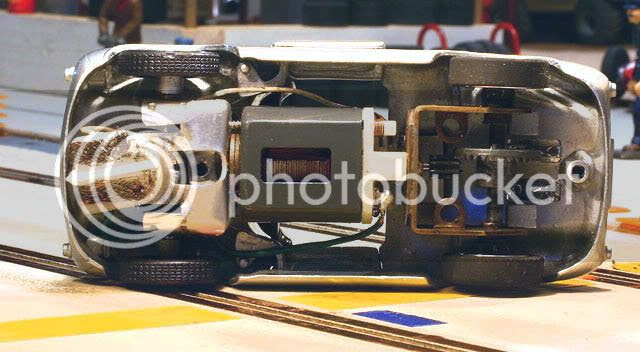 The motor is an old Revell SP-500, the first of the FT-16 type slot car motors, from 1964. It is a mild motor, about the same power as an NC-1. Gears are 4:1, unchanged for this experiment. Tires are EJ's rubber, about like Ninco Classic rubber.

The car is a bit slower, but it handles better. Sudden tip-outs plagued this car as a plastic body coupe, but as a metal body spyder, it is more stable. Brakes seem to be the same; maybe a little softer, but not bad. In fact, I think I'll leave it with the 550A Spyder body.

I had been using this diecast Porsche's front wheels and tires all along, thus the good fit. Rears were turned into inserts, and placed inside Revell aluminum wheels from the days of old.

Excellent results from this experiment. The drivability of the car is not compromised; the brakes remain good, the acceleration is slower, the cornering is more stable, and the lap times are about 94% as fast.

Robert Livingston, Technical Editor
Posted by DaveKennedy at 12:01 AM