NY Toyfair round up

So the show is over... here's what left in the notebook.

Arii is not going to make 1/32 models anymore, which stinks since there's some really nice models of hard to find cars that they made.

In a conversation with Scalextric I learned they're constantly working on the tire compound they produce. So the rumors may be correct about improved grip from the new vintage F1's. The Scalextric Porsche RS Spyder will hit stores in late summer.

Some thoughts on the Carrera 1/32 Porsche RS Spyder that I wasn't allowed to photograph. It seems to be a well done model and it should hit stores in March/April, so we don't have long to wait. The contours of the RS look well done, but maybe lacking some of the sharp quality in the lines of the real car. The interior is a half pan and has a really finely detailed dash. 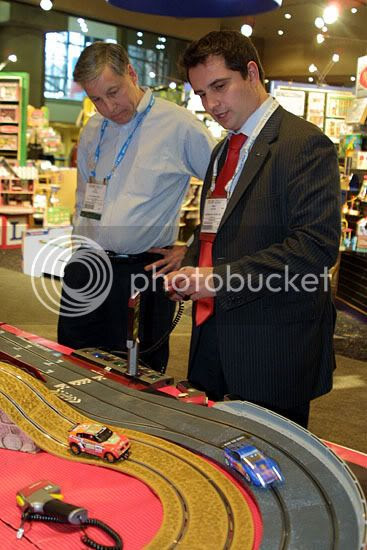 SCX seems to be heading in the right direction with constantly improving their designs. With each year's cars they are changing what they do, last year they put rattling/pivoting motor pods in their cars. This year they'll release serious racers with the Pro line of cars. The car looks like it's fast and looks like it's got all the potential of any of Slot It's cars.

I got to try SCX's digital system at the show and so did a friend of mine. Gene Molzon, owner of Slot Car Place got to race a bit with me and Marc Solano of SCX. We were both impressed with the set and the ease of use. Within a few laps you got the hang of how to pass and it was really great. The functions of the set are well thought out and SCX has really made a nice selection of track (including banked turns) and with over 24 cars now available for use on their digital tracks, this is a set that you should consider if you're thinking about going digital.

On a related note, the guys that were there from SCX (Chuck and Marc) were very interested in talking with Gene and I about a range of topics, I know I'm safe in speaking for Gene in saying that we both appreciated that.

Every slot company at the show is very focused on Nascar and the North American market now. One exec. admitted that in the past the North American market was and after thought, but no longer. It's clear that the US/Canada is high on the list of priorities for most companies. Frankly it would be stupid to do so. But what is lacking, especially in one company, is an understanding of what will sell (ie what liveries they should make). The drivers HAVE TO BE POPULAR to sell here. Because as I stressed to one exec., it's the drivers that people follow, it's not as much about the brand of car. So unfortunately the rumors are that a Dale Jr. slot car would cost tens of thousands of dollars because the license. And since his major sponsor is Bud, there won't be a car because they don't do alcohol liveries... that's what I was told, don't shoot the messenger.

DaveK
Publisher, Slot Car News
Posted by DaveKennedy at 12:03 AM