MRRC is releasing a significant addition to its Scaleauto line of motors. The creators of the dreaded Red Can 35k motors have now turned their attention to the little guys, in size and speed. Enter the White Cans, rated 10k RPM at 12 volts, available in the standard "S" or FC-130 size; and low profile FF-050 types, for down-motoring earlier MRRC/Revell-Monogram cars, Scalextric Classic F1, and other cars with low profile motors. 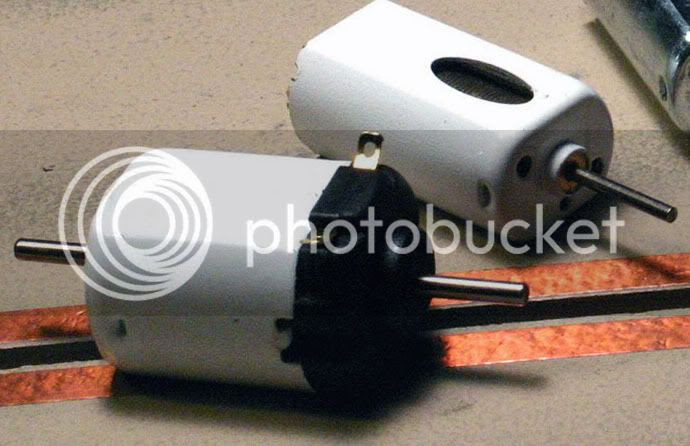 The Scaleauto white motors have shafts extending from both ends; the FC-130 may be mounted endbell-drive, to fit in brackets for standard Scalextric or Fly motors; or can-drive, to fit in brackets for Ninco NC-1, or Carrera motors. The slim cans have a stub end shaft on the non-drive end to allow easy lubrication of both motor bearings. Torque rating for the FC-130 is 100gcm/12v (compare to an NC1 at 60 gcm/12v); for the slim can it is 45gcm/12v. Power of the Scaleauto white FC-130 is some 31% higher than the Ninco NC1 (using the formula RPM x Torque = Power), so installing this motor is not necessarily a downgrade for NC-1 cars.

Complementing these low-revving white motors is a full range of slim motors in steps up to 38,000 RPM, for the speed demons among us. As customary in the Scaleauto line, RPM is coded by can color. RPM/torque levels are 20k/70gcm (silver), 25k/90gcm (yellow), 30k/100gcm (black), and 38k/120gcm (red). This is the first time such a range of FF-050 slim cans have been sold with torque values revealed.

Tests of sample motors showed all to be at rated RPM, or up to 1,400 RPM above rated RPM. None were slower. Thanks to MRRC for the samples.

Now, if only someone would release a line of brass pinions for the slim motors, bored to press fit on a 1.5mm motor shaft.
Posted by Robert Livingston at 12:09 AM