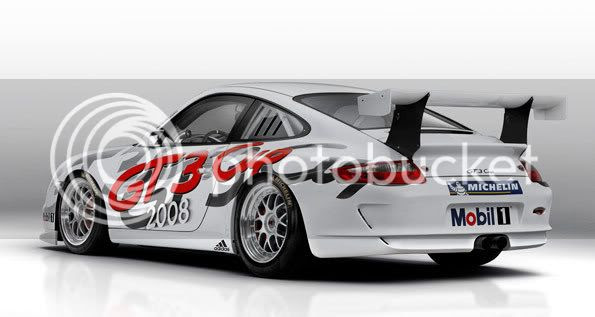 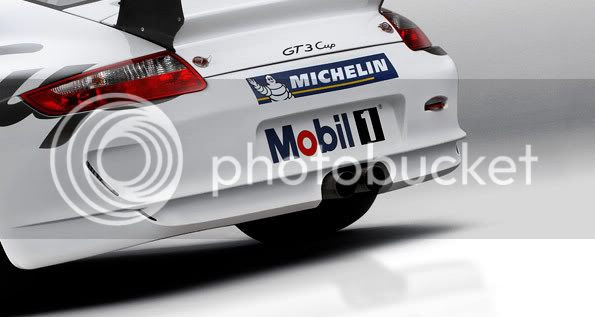 Porsche has made some changes to the 911 (997) GT3 Cup car for 2008. Will these changes be enough to make slot manufacturers change upcoming cars. Probably not since it would involve all new molds. But it does mean that there is a 3 year window of liveries that companies can make.

The AutoArt Cup car to refer to is below:

And the Ninco version:

From Porsche Motorsport:
The new Porsche 911 GT3 Cup is entering the 2008 motorsport season with engine output increased to 420 bhp. The 911 GT3 Cup (997) was developed based on the current 911 generation, which has been gradually and successfully established in the market since the end of 2004.

The most significant modification compared with last year’s model is the new rear end following the design of the production model. Air venting slits ensure better dissipation of heat at the rear. The 3.6-litre six-cylinder boxer engine developed in Weissach is also based on the street-legal GT3 and develops maximum output of 420 bhp, 20 horsepower more than on the previous model. The sequential six-speed transmission with interruption of engine power enables the driver to shift up under full throttle without disengaging the clutch. The transmission itself has been optimised and the gear ratios adjusted to the characteristics of the engine. Weighing 1,150 kg in race trim, the new 911 GT3 Cup has a power-to-weight ratio of 2.7 kg per horsepower.

26 units of the 911 GT3 Cup built for the Porsche Mobil 1 Supercup feature a special exhaust system with an even more striking sound pattern reminiscent of the Formula 1 racing scene as well as PCCB Porsche Ceramic Composite Brakes as exclusive highlights. Compared with conventional brake discs, PCCB reduces unsprung masses by 20 kg and sets new standards in terms of responsiveness, resistance to fading, and a long service life. The racing cars entered worldwide in the Carrera Cup feature a modified exhaust system and steel brake discs.