Hamilton continues to impress in Bahrain 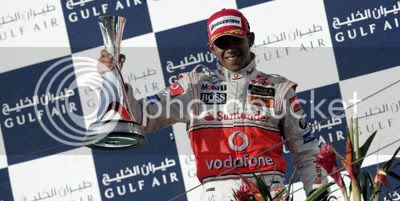 Vodafone McLaren Mercedes driver Lewis Hamilton finished the Bahrain Grand Prix whilst Fernando Alonso ended up fifth after struggling with the balance of his car throughout the race. In only his third Formula 1 race, Lewis finished on the podium for the third consecutive time. Both drivers were on two-stop strategies with Lewis pitting on laps 19 (9.9 seconds) and 44 (7.1 seconds) whilst Fernando pitted on laps 22 (8.4 seconds) and 43 (6.6 seconds). The Spaniard, winner of the last race in Malaysia, leads the Drivers’ Championship with 22 points; Lewis and Kimi who finished third today, are both also on 22 points. In the Constructors' Championship Vodafone McLaren Mercedes are leading with 44 points.

LEWIS HAMILTON
“I’m very pleased with today’s result. To have finished on the podium three times out of three is fantastic. We have definitely closed the gap to Ferrari and I know everybody will continue to push hard to improve even more in time for the Spanish Grand Prix. I was able to keep up with Felipe in the first stint but I really struggled with the balance of the car in the second. I had a lot of under steer and wasn’t able to brake as late as I would have liked. However after the second pitstop when I changed to hard tyres I was able to push again. I really enjoyed the race today and with a few more laps I might have been able to challenge Felipe for the lead.” 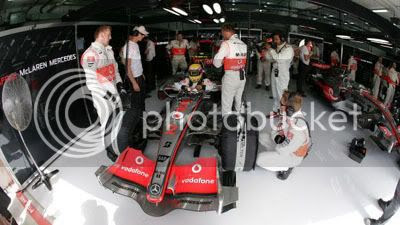 News and photos used with permission from www.McLaren.com
Posted by DaveKennedy at 9:52 PM