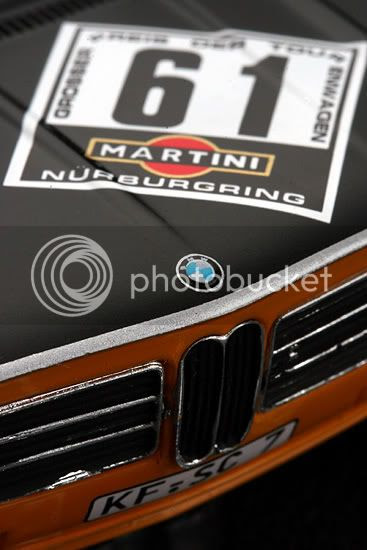 Publishers note: There's been a lot of talk on the message boards about the quality issues with the latest Spirit release, the 2002 (or is it 1600?) BMW Alpina. I received a car for review weeks ago but there were issues with the finish and a few mechanical issues (a damaged motor pod being the primary issue) that lead me to discuss with Spirit and Kimrey Enterprises (the US distributor of Spirit) those issues. The recent production shift to China by Spirit is what I believe is the cause of some of these issues with quality control. The response from both Spirit and Kimrey Enterprises was great. All the concerns I had were addressed and there is an honest effort to address not only the problems with Spirit cars, but be open and quick to respond to problems. They're showing good customer service to what might have been a larger problem had they not addressed the concerns of customers. I was sent a second car and that car presented none of the problems the first car had. 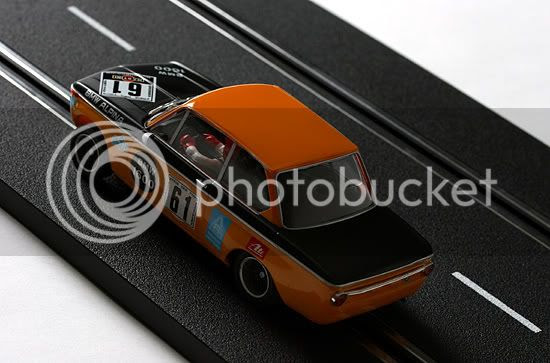 The finish on the car:
The body finish was good on the reviewed car. The orange paint was even and bright and the flat black accents were also executed well.

The fine details that were printed on were exceptional, the highlight being the BMW logo and the hood Martini number field. This car comes from just before the era of sponsor decals hiding the beauty of the car itself, which is great because this is a very pleasing little model to admire. Square body lines and a high greenhouse are what this car is all about and it's nicely done here by Spirit. 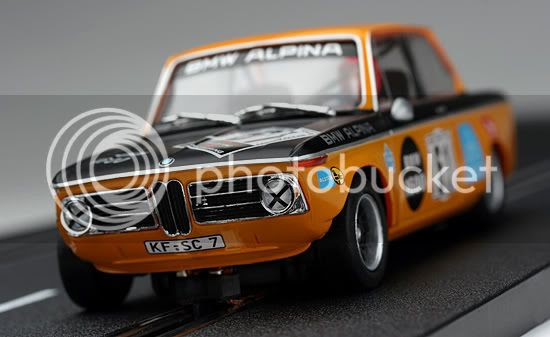 Running gear:
The Spirit BMW packs a lot of punch in a small package. The decision to use the high torque S3X motor was certainly one that might be a surprise to some. This is the same motor used in much larger cars and it might be too much motor for some slotters. 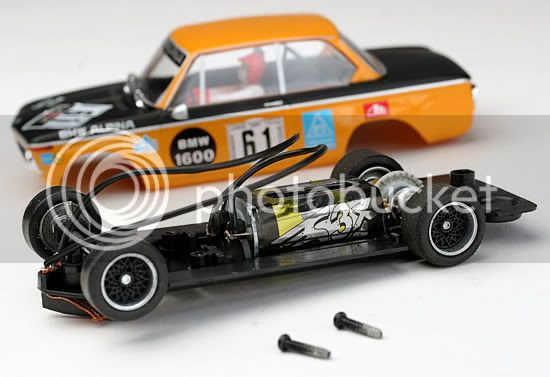 There are small holes in the motor pod that you could put 2mm screws in to better hold the motor in place. I personally feel that if Spirit took the time to include these screw holes in the design of the car it would be appropriate that they also included the screws for those holes. It would lead to a much stronger hold on a very torquey motor and would help cure what I believe to be just a bit of "high torque hop" that I've seen with the car while testing it on my track. Under heavy acceleration, especially out of the corners, there is a bit of what has been referred to in the past as "Ninco hop". This problem I believe is made worse (if not caused) by high torque motors mounted in pods that aren't sufficiently braced and stiff. This problem is lessened (if not fixed) but gluing the motor into the pod and screwing those 2mm screws into the pod just on either side of the end of the can, next to the pinion. 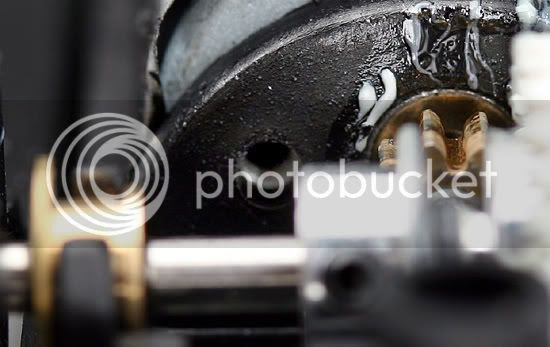 The 9 tooth pinion and 27 tooth crown have a good feel, high torque motors do like a bit less reduction so a change to a 23 tooth crown might give a bit more speed down the straight, but then this car is already a little rocket...so more speed might be a something completely unneeded.

There is very little clearance for the tires inside the fenders and if you do a combination of a very loose motor pod and a loose body there is a tendency to the to contact the tires, a bit corner sanding on the tires will help this. After the sanding the car actually stuck quite well to my wood track, yes with the stock tires! The compound on these tires feels quite different from other recent releases by Spirit like the Peugeot 406 coupes (though I have no idea if it actually is or not, it's just a guess on my part). The tires on the Reynards and Dallaras I found to be totally unsandable, the compound on this car was very sandable...a very pleasant surprise! 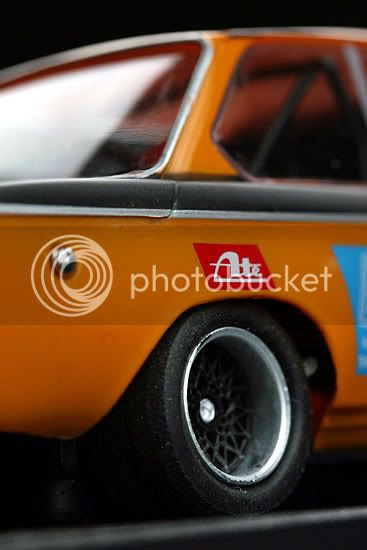 The strong magnet which is nearly touching the track holds the car to plastitrack like glue. During a recent test at my local hobby shop, the car would scrape the track on an uphill turn because of the minimal clearance under the little car. 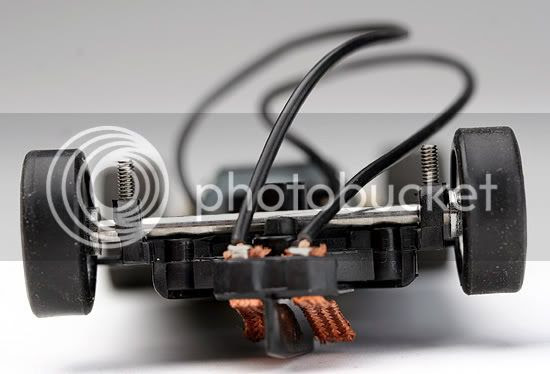 The front axle has small set screws so you can adjust height of the axle. The car does not have enough play to allow much adjustment. In fact I had to shave out a bit of flash inside those axle loops to allow free rotation of the axle. After I did that small bit of shaving, the screws did allow more adjustment. If you've got one of these cars give it a try, there may be just a touch of flash that's not allowing the axle to travel as it should.

Performance:
Plastitrack testing was a bit of a mixed bag. The magnet really held the car down very tightly and it gave the already stop-on-a-dime brakes of the S3X motor even more stopping ability. But because of the magnet being so low the car was quite fast down the straights but not as fast as I'd expect in the corners. This testing was done before I'd sanded the tires so I' expect that now the car would corner better with a smoother transition from tire bottom to tire sidewall. And it's worth repeating, these are very sandable tires.

Wood track testing on my small wood track was actually more pleasing since the magnet wasn't in play and brakes weren't quite as strong. As I said there was a bit of "high torque hop" if I put too much acceleration into my effort to get this little car to go fast.

Conclusion:
All in all the reviewed car was a nice little car if not somewhat overpowered. I'll grant you that's a personal opinion, but I like under 2-liter cars to have a motor that more closely represents the actual motor the real car had...I know that many might not share that opinion.

As I said in the beginning of the review some of the cars have quality control issues and some appear to have none of these problems. If you do have a car with issues, contact your hobby shop or Kimrey Enterprises. Customer service is VERY important to Cal. Many other brands have issues and we've all gotten used to having to cut a motor shaft here and do a bit of tire sanding there...any manufacturing problems are being addressed by Spirit a bit of patience may be needed. But Spirit is going there own way with some interesting cars upcoming... Porsche 936 anyone?!?

This car has proven to be a popular car for Spirit and in fact sold out in many retail outlets. There will be another shipment of cars arriving in the US soon so if you missed the chance to buy this car during initial sales you've got another chance to pick this car up soon.

Recently Spirit reorganized and the sales success of recent releases I'm sure will be good news to not only the company but to fans that would like to see Spirit thrive as they move forward with more unique releases. 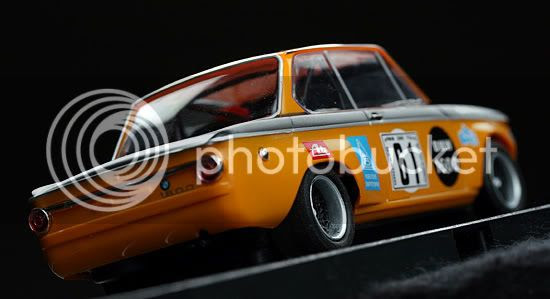 A huge thanks to Spirit and Kimrey Enterprises for providing the review samples!

Seriously. It's killing me that I keep hearing about this and seeing the pictures yet, I can't find anyone actually selling it. I've contacted Kimrey Enterprises about 3 times via email and never got a response. Can you PLEASE tell me how, who, where I can get one?

Michael, there's another shipment of these coming into the US soon. Try Cal again.
Dave

Call who? Kimrey doesn't post a phone number and contact via email hasn't seemed to work. Do you have a contact name and #? Maybe a brick and motor reseller you can reco? Thanks

Michael...this is from the Kimrey Enterprises website listed on the contact info page. Cal Kimrey is the owner, and a damn nice guy too! Give him a call to get the latest info on this car.