HOUSTON, Texas – April 21, 2007 – Timo Bernhard (Germany) and Romain Dumas (France) held off the late charge of the Herta/Franchitti Acura to score a four-tenths of a second overall victory for the second week in a row, at the Lone Star Grand Prix of Houston – the first time in American Le Mans Series history an LMP2 car has won overall twice in a row.

Dumas took the lead from the McNish/Capello Audi LMP1 car on lap #54 – 48 minutes into the event – and kept the top position all the way to the end, losing the lead to the team Maassen/Briscoe car just briefly when both cars pitted in the middle of the race. When Bernhard took the wheel, he knew the finish would not be easy. 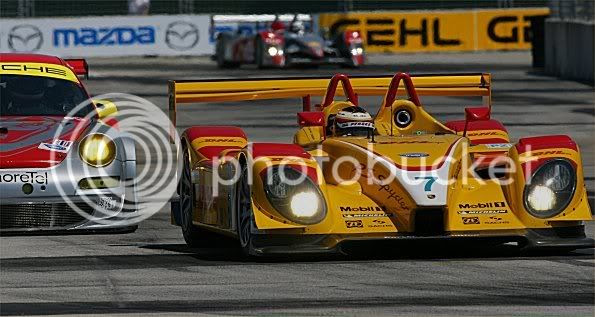 “The RS Spyder was handling perfectly, and we had an advantage over the Acura with fresh tires, but the last 30 minutes were the hardest of my racing career. We had the lead up to seven seconds with a good re-start after the yellow flag, but I lost half that time in slower traffic, and we had to push hard in the end to hold off the Acura. Tim Cindric kept me informed lap-by-lap on the radio, and I knew exactly where the second-place car was,” said Bernhard.

“It was well worth the trip from Japan,” said Porsche Racing President Tim Cindric, who had called the race in the Far East for the Penske IndyCar team earlier in the day and was on the radio for the winning Bernhard/Dumas car.

“I arrived right after the start of the race, and told the team I was here for a victory party. With two overall wins in a row, everyone can see that Penske and Porsche have something special here,” he said, pointing out it was the team’s third overall win dating back to last season (Mid-Ohio in ’06 and last week at Long Beach).

The Lone Star Grand Prix at Houston's JAGFlo Speedway at Reliant Park will be broadcast on CBS Sports on a tape-delayed basis at 1 p.m. EDT on the next Sunday, April 29.

The team RS Spyder of Sascha Maassen (Germany) and Ryan Briscoe (Australia) finished third in LMP2 (fourth overall), solidifying their hold on second place in the class points. Bernhard/Dumas lead with 75 points, while Maassen/Briscoe have 58 points, and the leading Acura drivers have 49 points. Porsche now leads the LMP2 class manufacturer’s championship points over Acura, 79 to 65. The victory also marks the second time the Audi R-10 LMP1 car has been outdistanced by LMP2 competitors. For Bernhard, it was his 19th American Le Mans Series victory, while Dumas now has 13 ALMS wins.

Ryan Briscoe, who qualified the RS Spyder he co-drove with Sascha Maassen, said the team was struggling with the setup on the bumpy street course all weekend, and the race itself was the best the car had been since it came of the truck in Houston.

“We were only 14 seconds behind at the finish, but traffic was not kind to us during the last part of the race,” said Briscoe, who now has two second-place finishes with Sascha to go along with their class win at St. Petersburg. 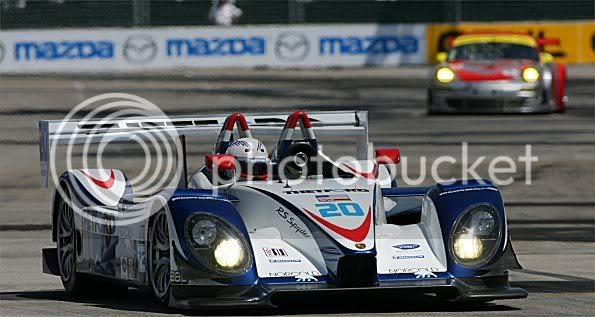 Dyson Racing photo from Porsche
The Dyson Racing Porsche RS Spyders finished fifth and sixth in LMP2 (sixth and seventh overall), just ahead of the Fernandez/Diaz Acura. The Chris Dyson (USA)/Guy Smith team car was fifth after Dyson spent more than 50 minutes leading Diaz around the track in some of the best nose-to-tail racing of the season. Sixth was the Andy Wallace (England)/Butch Leitzinger (USA) Dyson Porsche, which also had a good battle with the same Acura (Leitzinger with Fernandez) near the end of the event.

In the GT2 class, the Flying Lizard Motorsports Porsche 911 GT3 RSR again led the class late in the race, but could not prevent the Risi Ferrari 430 from winning its fifth race in a row.

Image copyright Bob Chapman Flying Lizard Motorsports
The Johannes van Overbeek/Jorg Bergmeister entry led the event with 30 minutes to go after everyone had completed their yellow-flag pit stops, but Ferrari prevailed by six second. The Wolf Henzler/Robin Liddell Tafel Racing Porsche was running fourth, a full lap out of third place when the Ferrari in that position was issued a stop-and-go penalty with just a minute remaining in the racing, giving the team its second podium finish. 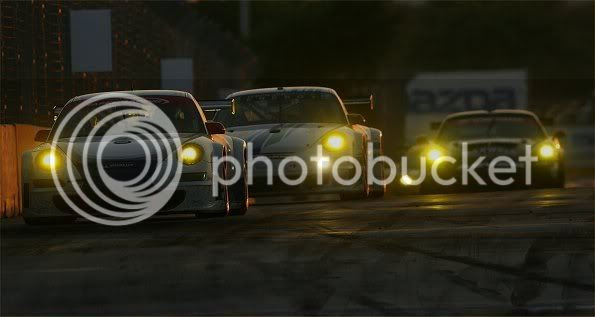 --------------
News copyright Porsche, Spyder images copyright ALMS no reuse without their permission.
Posted by DaveKennedy at 12:00 AM