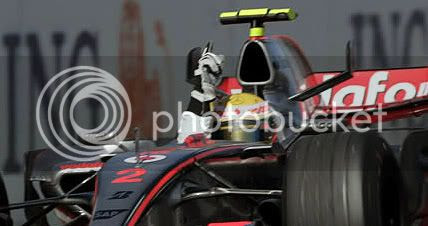 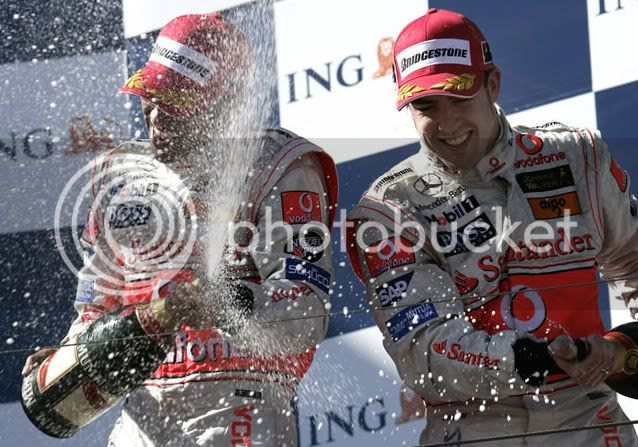 Alonso and Hamilton celebrate their 1-2 finish
Photo www.McLaren.com
In the sauna-like conditions Alonso never put a foot wrong after taking the lead on the run down to the first corner. Lewis Hamilton drove another brilliant race to take second place despite being under extreme pressure from Kimi Räikkönen’s Ferrari in the closing laps. Into fourth came Heidfeld in the BMW-Sauber, who also had to fight off Massa in the second Ferrari. Fisichella came home sixth after starting from twelfth place on the grid and Heikki Kovalainen saw the flag in eighth spot.

The air and track temperatures at the start of the Malaysian Grand Prix were 34°C and 54°C respectively. When the lights went out Alonso blasted through from second place to pass Massa’s Ferrari as the cars barrelled into the first corner. His team-mate Lewis Hamilton did likewise from fourth on the grid. At the end of the first lap the 2 McLarens led the 2 Ferrari and the 2 BMWs with Heidfeld ahead of Kubica. They were all on soft rubber. 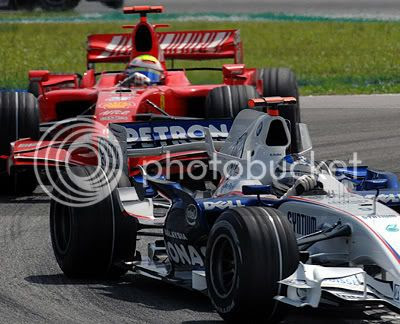 Heidfeld holds off Massa.
Photo from BMW
The first of the ING Renault F1 Team drivers was Giancarlo Fisichella in eighth spot who had made a brilliant start gaining 4 places. The Italian quickly set about pulling in Nico Rosberg’s Williams while Heikki had moved up a position to tenth just behind Jarno Trulli’s Toyota.

On lap 4, Massa lunged inside Hamilton in the first corner but failed to overtake the young Brit. A little further on it looked like he was through but Lewis wasn’t having any. Up front, Alonso had already opened up a gap of 5s. A lap later Massa tried to pass Hamilton again, went wide onto the grass and rejoined in fifth behind Heidfeld.

On lap 11, Rosberg got past Kubica’s BMW to take sixth. The Pole then dived into the pits to refuel allowing Fisichella and Kovalainen to move up a place. Alonso was now 10s ahead of Hamilton, who, in turn, was only 1s in front of Raïkkönen in the leading Ferrari.

At the end of lap 17 Massa came in for his first refuelling stop followed a lap later by the leader and Raïkkönen. Rosberg in sixth pitted on lap 19 and Hamilton on lap 20. This allowed Heidfeld into the provisional lead. He came in at the end of lap 22 soon followed by both Renaults. At that moment the order was: Alonso, Hamilton (+10.9s), Raïkkönen (+21.1s), Heidfeld (+25.5s), Massa (+28.6s), Rosberg (+34.1s) while Fisichella was in eighth place and Kovalainen in tenth. Once again the leaders all shod soft tyres.

There were no changes up front until Hamilton initiated the second round of stops on lap 38. He was followed by Rosberg (6th, +42s) and Trulli (8th, +59s). Kovalainen came in a lap later and Alonso and Massa on lap 40. Raïkkönen pitted on lap 41 and next time round both Heidfeld and Fisichella made their final stops. This time the leaders had no choice and they all rejoined on hard rubber.

On lap 43, Nico Rosberg’s Williams slowed and he parked it on the grass, the end of a sterling drive by the young German. The order was now: Alonso, Hamilton (+16.4s), Raïkkönen (+23.3s), Heidfeld (+36.3s), Massa (+ 37.6s) while both Renault drivers were now in the points with Fisichella sixth and Kovalainen eighth.

With 5 laps to go to the finish the Ferraris seemed to be quicker on hard rubber than their rivals, and Raïkkönen was back to within 2.8s of Hamilton while Massa was now only 1s behind the fourth-placed Heidfeld.

But it was too late for the Scuderia and after 56 laps Fernando Alonso took the chequered flag after dominating his rivals. Hamilton hung on to second with RaÏkkönen only 0.7s behind. The two Renaults came home in sixth and eighth positions giving Kovalainen his first points-scoring finish in only his second grand prix. 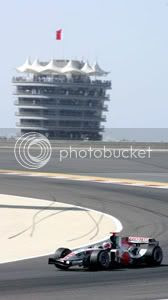 On to Bahrain...
The Honda Racing F1 Team heads from Malaysia to similarly hot and sunny climes in the Middle East this week for Round Three of the 2007 FIA Formula One World Championship in the Kingdom of Bahrain.

With just one week between races and no opportunity for testing, the trackside team will continue to focus on extracting as much performance as possible from the RA107 for the next race, whilst back at Honda’s three bases of operation at Tochigi in Japan, and Brackley and Bracknell in the UK, development work continues apace in preparation for the start of the European season.

RUBENS BARRICHELLO
“With no time to develop the car for the next race, our focus will be on doing the best job possible with what we have right now. Despite the problems we have with the car, we can still do better, particularly in terms of our qualifying performance. If we can work on that it is possible to get both cars in the top ten and closer to the points so there is progress to be made whilst we’re working on the bigger developments back at the factory.”

Located in Sakhir in the south of Bahrain, the Bahrain International Circuit opened in 2004 and hosted its first Formula One Grand Prix in April of the same year. The development of the circuit was funded by the Bahrain Government and firmly supported by the Crown Prince of Bahrain, Shaikh Salman bin Hamad Al Khalifa, a lifelong motor sport enthusiast.

The circuit and its facilities are extremely impressive with the track actually consisting of five separate circuits, including a 2.5km oval and a 1.2km drag strip. The 5.417km clockwise Formula One circuit features a 1km pit straight, 12 turns including several low-speed corners which increases the technical emphasis on aerodynamic efficiency and traction, and a relief that ranges between 0 and 18 metres to create an undulating track.

The hot weather usually experienced over the grand prix weekend poses a challenge for both car and driver, and although the humidity is generally lower than in the Far East, track temperatures will be high.

Bahrain photo used from HondaRacingF1.com no reuse of any photo without permission of the above media outlets.
Posted by DaveKennedy at 7:32 PM